Computer use among immigrants in the workplace - how does it vary by gender, educational level, ethnicity, occupation and tenure?

Are immigrants more likely to use a computer in the workplace compared to the Canadian-born? How does it vary by gender, educational level, ethnicity, occupation and employment tenure?

The occupational attainment and mobility of immigrants in host countries are well discussed in the literature. In general, immigrants have an occupational disadvantage compared to Canadian-born workers, partly because immigrants have difficulty transferring their educational skills to their host country. Studies have shown that individual and structural factors affect the occupational mobility of Canadian immigrants (Basran and Li 1998; Reitz 2007). Four major individual factors include ability to meet occupational standards, lack of Canadian experience, proficiency in English and French and period of residence in Canada. Major structural factors include the recognition of the foreign credentials and experience by host country employers, and experiences of discrimination.

In order to assess the occupational integration of immigrants, this report asks whether immigrants and the Canadian-born have equal access to jobs that incorporate high levels of occupational skill. Since measuring access to upper-level occupations is difficult, in this study we measure computer-use in the work-place as a proxy measurement for high-skilled jobs. Literatures in work and technology have shown that workers benefit from computer use. Pabilonia and Zoghi (2005) conclude that wages for workers who use computers grow faster than those who do not use computers for different functions at work. In a subsequent paper, Pabilonia and Zoghi (2007) find that skill-biased technical change explains the increasing wage of computer users. They also found that highly skilled workers, such as college graduates, managers and professionals earned more from adoption of computers. Examining the relationship between computer ownership and entrepreneurship, Fairlie (2006) found that people who had access to a home computer are more likely to become entrepreneurs and create a variety of businesses beyond the IT industry.

Computer use has been found to benefit all workers, but also immigrants in particular. Using data from the 2001 Census of Population and Housing in Australia, Chiswick and Miller (2005) find that computer use is one way that immigrants can increase the transferability of their pre-migration skills. Ono and Zavodny (2008) investigated the relationship between computer use and English ability using U.S. data and found that computer competency appeared to be a key factor in the polarization of the U.S. labour market. Assessing inequality in computer use between immigrants and the native-born is thus important because of the influence of computer competency on the employment and educational opportunities of immigrants. Many new immigrants have an IT background, but they may not use it when they come to Canada, while a lack of IT access and skills may be a barrier to integration (Boyd and Thomas, 2001).

This report investigates whether immigrants have an equal probability of computer use when compared to the Canadian-born. Similar to the studies mentioned above, a computer includes a microcomputer, mini-computer, personal computer, mainframe computer or laptop that can be programmed to perform a variety of operations (Statistics Canada, 2003).

This report investigated computer use among immigrant and Canadian-born employees by types of computer application, gender, education, ethnic groups, tenure and occupation. The main findings are as follows. 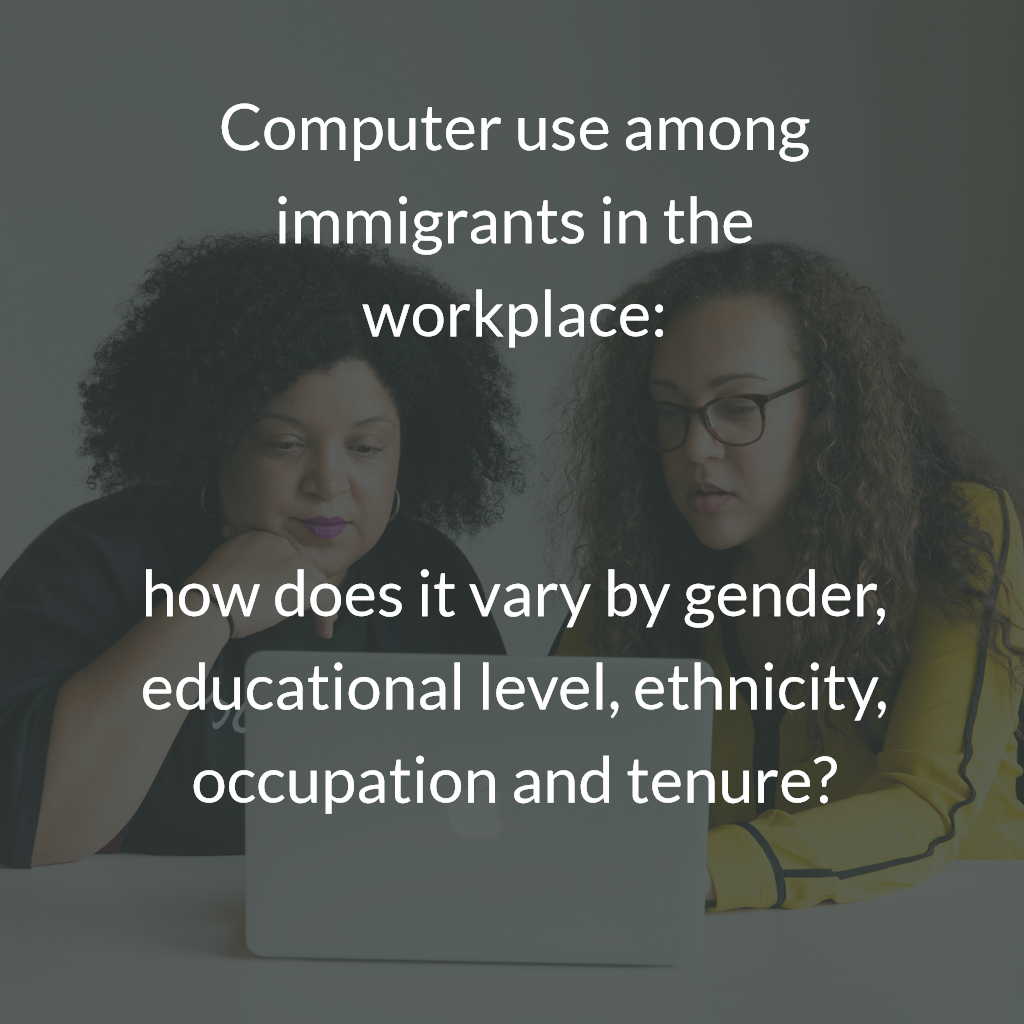 In order to assess the occupational integration of immigrants, this report asks whether immigrants and the Canadian-born have equal access to jobs that incorporate high levels of occupational skill.