This report looks at income trends between 1980 and 2015, as well as the income gap between young people, immigrants, racialized groups and the rest of the population in Peel, Toronto and York regions. The findings paint a stark picture of who has access to the opportunities to succeed, and who is being left behind because of circumstances they can’t control.

Young adults in the GTA are more disadvantaged today than ever before. In real terms, a young person in the GTA is earning less today than they did in 1980.

Why is this happening and why does this matter?
Young adults today are facing labour market challenges of a higher magnitude than they did in the past. The nature of work has changed, from a majority of steady, long-term, and living-wage opportunities to employment that is increasingly short-term, precarious, and low-wage. This is creating a divided labour market where young people are at a disadvantage. As people are living and working longer, older workers with years of experience and mature networks appear to be more advantaged in the growing knowledge and professional service economy. At the same time, improvements to Canada’s income security system for seniors means that most of those who did not enjoy high incomes or have defined benefit pensions still have a higher income today than previous cohorts. And while older generations have made significant gains from the rapid growth of housing values, this has only served to constrict home ownership for young people and amplify a growing housing affordability crisis in the GTA and elsewhere. These trends mean that this will be the first generation that will not do as well as their parents.

In the GTA, it doesn’t matter how long you’ve been in Canada, the fact that you weren’t born here means that you are earning less.

The average income of longstanding immigrants, who have been in Canada for more than 20 years, has not increased in 35 years. The average income of the Canadian-born population has increased steadily over that time period. A longstanding immigrant in 2015 was making the same income—or lower—than a Canadian-born person made in 1980.

Why is this happening and why does this matter?
Immigrants face a challenging labour market in the Toronto region. A lack of recognition for foreign gained experience and credentials leads a disproportionate number of immigrants to work in low-wage, precarious jobs that are often below their education and experience levels. Precarious work can create and reproduce a cycle that limits the ability of many skilled and educated immigrants to move into higher paid work, which can result in long-term differences in life experiences for these groups. These trends mean that despite a growing economy, our region is wasting potential, with people not able to fully utilize their full range of skills and experience in the labour market.

Why is this happening and why does this matter?
The rise of precarious employment, the decline of unionized manufacturing, and the persistence of experiences of discrimination have continued to make the labour market challenging for many racialized groups in the Toronto region. The growing population of racialized persons, combined with the increasing costs of living in one of Canada’s most expensive regions, means that these trends can make daily life a challenge and the ability to get ahead an increasingly distant dream for many.

The report outlines several recommendations that all sectors can act on to ensure everyone can participate in society, enable people to get ahead and make life more affordable. It lays out twelve recommendations, organized under three overarching goals, that are necessary next steps for rebalancing the opportunity equation. 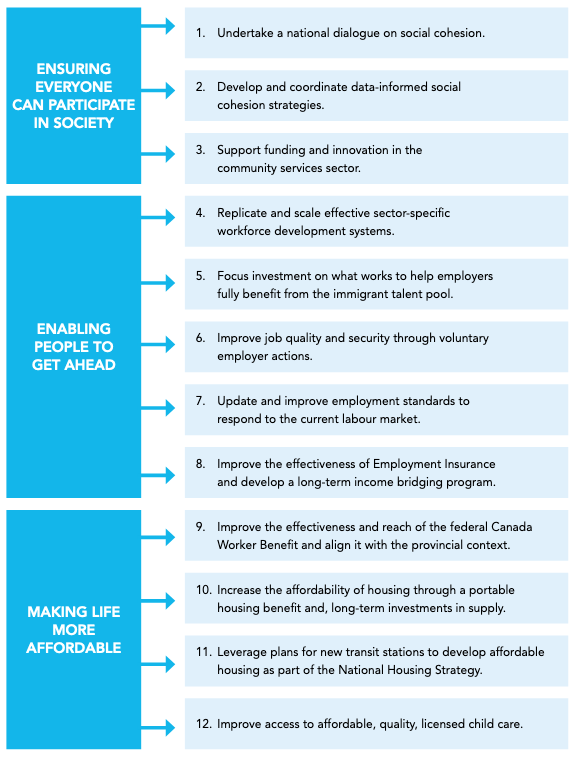 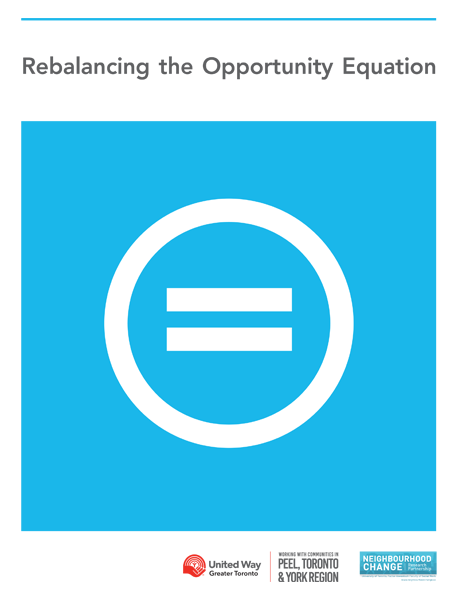 This report looks at income trends between 1980 and 2015, as well as the income gap between young people, immigrants, racialized groups and the rest of the population in Peel, Toronto and York regions. The findings paint a stark picture of who has access to the opportunities to succeed, and who is being left behind because of circumstances they can’t control.