“We investigate how economic immigrants in Canada negotiate their identity in the process of “becoming Canadian” through an analysis of public texts. Drawing on the master narrative framework, we examine the interplay between individual and societal narratives as immigrants grapple with the tension between notions of “desirable” immigrants as those that are well integrated professionally and the reality of facing career related barriers.

Among those whose success stories align with the master narrative of professional attainment there was little questioning of this expectation, thereby allowing it to remain invisible. Among those who had not (yet) achieved work related success in the receiving country, they tended to engage alternative narratives elaborating on the antecedents, outcomes, and barriers to labor market participation.

Despite the countering nature of these alternative narratives, they strengthen the societal expectation of professional success as a key pathway to inclusion, thereby reinforcing the rigidity of this narrative. We contribute to literature on the social construction of national identity by examining the process of becoming national and the role of labor market participation in immigrants’ perceptions of inclusion in their new society. Our study highlights the importance of including immigrants’ voices in the construction of a more inclusive society, which may aid in breaking down exclusionary narratives of national identity.”

“In this paper, we use the master narrative framework to link identity and inclusion at the societal and individual levels, focusing on how immigrants in Canada publicly engage in identity work as a response to perceived social pressures and expectations. In particular, we focused on the identity work required vis-à-vis tensions arising from a master narrative that desirable immigrants are productive workers and can thereby enhance the economic community, and through this process achieve inclusion in the national group. Implicit within this narrative is a counter narrative, namely that undesirable immigrants are those who are not gainfully employed, and therefore act as a drain to social services and encounter barriers to inclusion (Cerna, 2014; Gibson, Crossland, & Hamilton, 2018). In line with the master narrative framework (McLean & Syed, 2015), we found that those whose personal narratives reflected the notion of professional attainment as a key marker of inclusion tended not to deconstruct or push against this expectation, thereby allowing it to remain invisible while simultaneously reinforcing it. In our study, immigrants aligning with the master narrative were also professionally successful, which suggest they felt positive about their migration experience. In addition, as a result to conforming with societal expectations they were more likely to feel included in society and enjoy better mental and physical health (McLean & Syed, 2015).

As in previous work, we found that while fulfillment of the master narrative may relate to positive individual and social outcomes, it may also come at a cost. Although those individuals for whom the master narrative remained invisible did not engage these potential costs in their narratives, they were made clear among individuals for whom professional attainment was not (yet) achieved. Among those who faced barriers towards fulfilling this master narrative, their alternative narratives nonetheless tended to reinforce it by framing quality employment as highly sought after, often downplaying the impact of institutional discrimination and related inequity. This finding underscores that the societal discourse of immigrant inclusion, which includes both immigration policy and national norms, can impact the ways in which individual immigrants make sense of their identities and tell their own stories in the public sphere.

Through in-depth examination of alternative narratives negotiated among those who faced barriers to meaningful labor market participation, we found that individuals unpack the master narrative and select important components, such as the antecedents to work, expected work outcomes or barriers to labor market participation, coupling these with their personal experiences of migration to craft alternative narratives that aim to negotiate a space in the national group. Our study highlights the importance of including immigrants’ voices in the construction of a more inclusive society, which may aid in breaking down exclusionary narratives of national identity. However, we caution that, often, alternative narratives can inadvertently reinforce the master narrative, further excluding those unable to meet social requirements for inclusion.

The understanding of such processes has important policy implications, as discussions of earned citizenship and stricter immigration policies are being enacted around the globe. In countries like Canada, notions of who deserves access to the social welfare state are closely related to professional attainment and labor market contribution. The increasingly stringent immigration and citizenship policies in Canada, a traditionally multiculturalist, civic-oriented nation, suggests the existence of a master narrative favoring gainful employment and labor market contribution, which has come to play a prominent role in who is understood as deserving of inclusion in the national group (Andreouli & Dashtipour, 2014; Cerna, 2014). We found that this narrative greatly impacts the framing of immigrants’ stories at the individual level as well, indicating that how immigrants engage in identity work is closely related to the expectations and demands laid out by national norms and policies.

This work therefore contributes to the bourgeoning area of research investigating the links between individual and national identity. Within psychological research, the contextual aspect of identity is often given little weight (McLean et al., 2017), whereas sociological and political research often overlook how policy impacts individuals (Pratsinakis, 2018). Our study bridges this gap by focusing on not only the impact of immigration policies on individual identity work, but also the identity negotiation process in which immigrants engage to claim inclusion in the national group.

We focused on publicly available stories written by immigrants to Canada about their lives and experiences. In doing so, we argued that such public accounts often foreground societal expectations as individuals negotiate their own identities. This both underscores which societal expectations and demands are deemed important and reifies such identity negotiation by granting immigrant voices a space in the public realm. Yet, this format also precludes other forms of stories that may be equally, if not more important to individual immigrant’s identities, which they may not feel comfortable sharing in such a context. For this reason, future research examining immigrants’ identity negotiation should also examine narratives elicited through alternate formats, such as interviews, focus groups, or spontaneous conversations. Future research should also explore the role of work in narratives of immigrants to other countries, in which different markers of inclusion may take precedence over professional attainment.

Additionally, this study did not delve into within group differences based on socioeconomic status, race, country of origin, or gender, all of which may contribute substantially to the structure and content of personal narratives (Hammack, 2008). That said, the predominant focus on professional attainment and related markers of inclusion found across the immigrant stories analyzed here makes the case that this master narrative cuts across groups. In future research, it would be beneficial to tease apart how various individuals may engage with this master narrative differently based on the intersection of additional characteristics and identities beyond that of being an immigrant. In particular, studies exploring the relationship between national identity negotiation considering the specific role of professional (Kyratsis, Atun, Phillips, Tracey, & George, 2017; Ladge, Clair, & Greenberg, 2012), ethnic (Atewologun & Sealy, 2014), and gender identities (Villares‐Varela (2018)) may provide interesting insights.

Increasing levels of global mobility present important challenges at the individual and national levels. There is a need to better understand the interrelationship between national policy, expectations surrounding inclusion into the national group and individual immigrants’ identity. Toward this end, we investigated the identity negotiation of immigrants in Canada. Our findings contribute to work on the social construction of national identity by highlighting how individuals’ personal narratives interact with master narratives, in this case pushing against and elaborating on societal expectations and demands, yet at the same time reinforcing the link between professional attainment and inclusion among immigrants in Canada.” 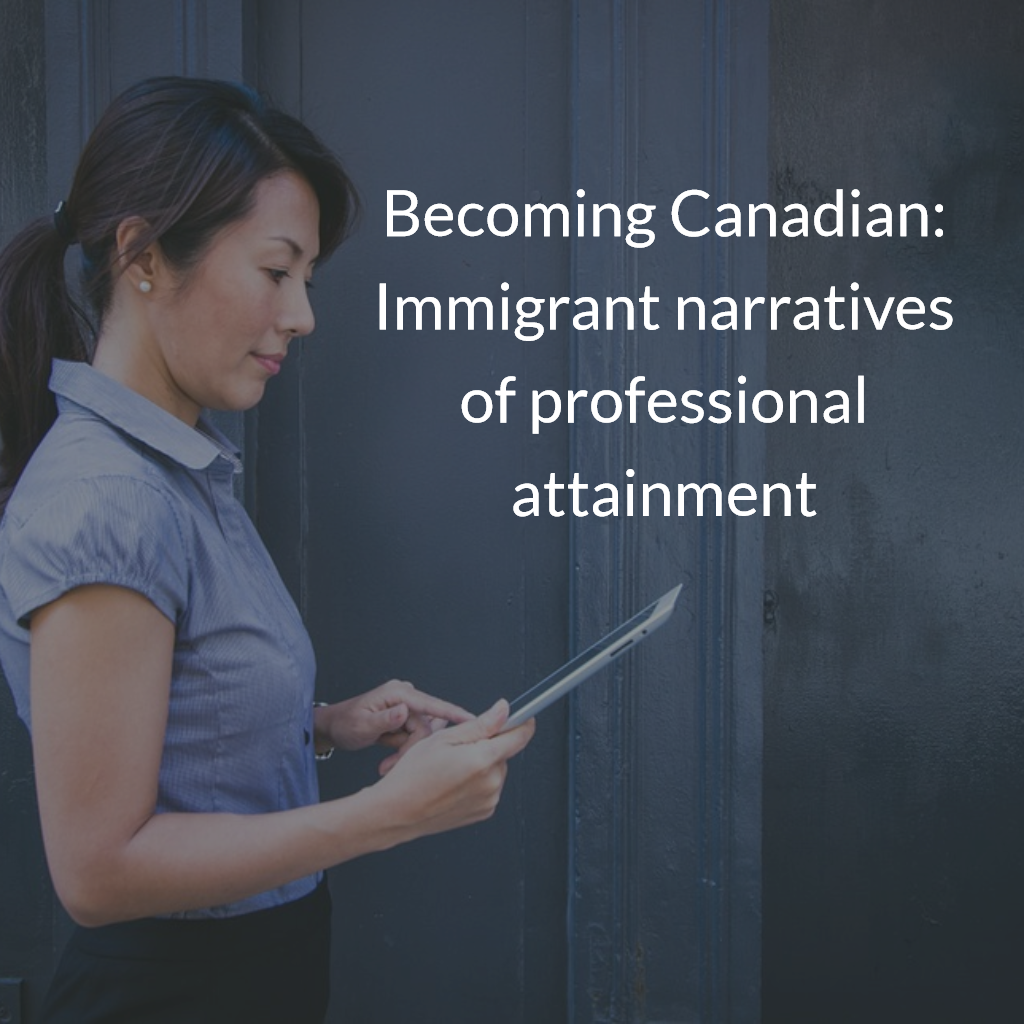 We investigate how economic immigrants in Canada negotiate their identity in the process of “becoming Canadian” through an analysis of public texts. Drawing on the master narrative framework, we examine the interplay between individual and societal narratives as immigrants grapple with the tension between notions of “desirable” immigrants as those that are well integrated professionally and the reality of facing career related barriers.