“The refugee settlement and integration process is demanding and stressful, especially for those who are coming from non-English speaking countries. The experiences of refugee women are doubly difficult as they often come as dependent immigrants and face many barriers during settlement.

While there is considerable literature on the settlement experiences of refugees, relatively little is known about the experiences of Syrian families, especially in rural Ontario. This brief engages with existing literature to consider the recent arrivals of thousands of Syrian refugees and particularly the roles and needs of Syrian women who have settled in rural Ontario. It is an initial sketch of my PhD research project, in which I focus on three communities (Guelph, Chatham and Ingersoll) in Ontario and apply a social relational approach to analyzing the settlement and integration experiences of Syrian families in the rural parts of the province. This approach analyzes gender inequalities in the distribution of resources, responsibilities, and power and helps in designing policies and programmes that enable women to be agents of their own development. By first puzzling out an approach to studying Syrian refugee women in rural Ontario, this piece sets the table for identifying strategies that will lead to better outcomes for Syrian refugee families in their settlement and integration in rural Ontario.”

“The literature shows that Syrian women are a disadvantaged group in rural communities. The Social Relational Approach (SRA) as an institutional analysis tool will clarify their situation by identifying the root causes of gender inequalities, such as skewed sexual division of labor and unequal access to basic resources, which may lead to their subordination in rural communities. The findings will help policy makers to design programs that target Syrian women’s specific needs in rural areas.

The findings in the literature raise issues about the suitability of rural communities to receive Syrian families, especially when considering the particular gendered needs of this population. As currently constituted, many rural communities lack the required services, supports, facilities, and cultural organizations to successfully integrate Syrian families, which may result in communities losing opportunities to retain such newcomers, revitalize their economy, and address population decline.

For example, the recent movement of Syrian refugees to three communities in New Brunswick may help stall or reverse the communities’ population decline. These communities are attractive to newcomers because of the low cost of living and the friendliness of locals. However, Syrian refugees highlighted that they faced barriers in entering the labor market, a situation which, if continued, would result in their leaving the community (Hellstorm, 2018). Moreover, their current situation hinders rural communities’ future attraction of newcomers with different backgrounds.

The findings are noteworthy given the current governmental interest in regional development in Canada. However, with limited dedicated federal funding to meet the settlement needs of Syrian families and, in particular, the needs of women (i.e., language training programs and transportation), government policies and initiatives may fail to successfully settle and retain refugees in rural communities. Rural communities need to take steps to facilitate integration by implementing strategies and policies to create welcoming contexts. The programs offered to Syrian families would be more effective if they acknowledge and respond to Syrian families’ specific needs. Assessing their needs and ensuring a gender-focused perspective in designing these programs will lead to client-centered and gender-aware programs.”

·         From Immigrant-Friendly to Immigrant-Competent: Improving the Immigrant “Dating Game” of Smaller Communities 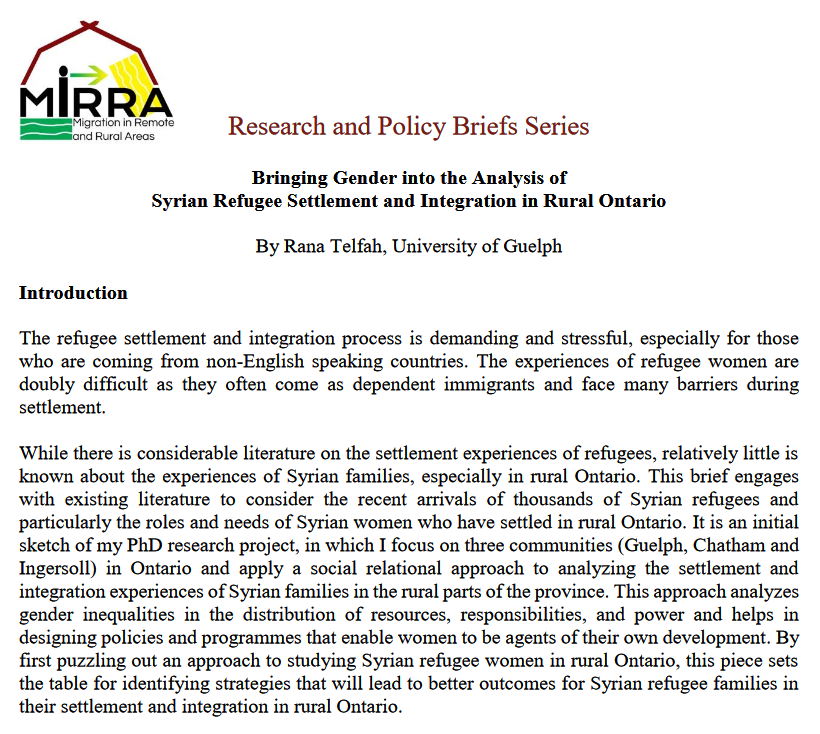