Entrepreneurship and Barriers to Scaling Up: Exploring the Entrepreneurial Activities of Newcomers in the Greater Toronto Area (2021)

This study explores entrepreneurship as an option for economic integration for newcomers living in the Greater Toronto Area.

What was the research about?

The objectives of the study were to:

What did researchers do?

The research team also conducted interviews with Business Improvement Associations (BIAs), both mainstream and ethnic-racial, to better understand the regulatory environment impacting entrepreneurial activity in the Greater Toronto Area. Participants in these informational interviews were knowledgeable individuals from service provider organizations offering resources and support to new entrepreneurs in Ontario."

What did researchers find?

Findings from Interviews with Representatives from Business Improvement Areas and Service Provider Organizations:

Findings from Interviews with Newcomer Entrepreneurs:

"Participants reported many motivations for starting their businesses, including having family and friends who were entrepreneurs; experiences of credential non-recognition and deskilling; wanting to be their own boss; career dissatisfaction; and the perception of Canada as a good place for business. Participants also faced many barriers when establishing and scaling up their businesses, including widespread financial challenges primarily centred around high start-up costs and the inability to secure loans or alternative funding sources. Other significant barriers included various marketing and sales challenges contributing to difficulty attracting customers; a lack of support from family, friends, and the government; limited personal and professional networks; complications related to hiring employees; and experiences with various forms of discrimination (e.g. racism, accentism, sexism, ageism, homophobia, etc.).

Participants expressed a desire for more newcomer-specific supports in the form of mentorship programs, pre-incubation courses, incubators, accelerators, and financing options. Participants also felt that the government could do a more effective job of communicating with newcomers and connecting them to existing entrepreneurship and employment supports and services upon their arrival. There is also a strong need for more newcomer women entrepreneurs and more supports for women in business in general, particularly for women working in male-dominated industries. Participants need more resources dedicated to assisting women entrepreneurs that want to start families, as there is a notable gap in services regarding affordable childcare and practical maternity leave. Refugees would also benefit from additional programming, as they face significant barriers and arrive under different circumstances than other newcomers."

"Men represented 60.1% of the participants who completed the survey. The average age of participants completing the survey was 40. Of all participants, 19.7% self-identified as Latin American, 16.2% as being of European descent, 47.8% as South Asian, 8.7% as Black, and 6.6% as East Asian. The majority of participants (42.9%) entered Canada through an Economic category or were sponsored by family (39.15%). Many participants were highly educated, with 71% reporting a bachelor’s degree or higher. Participants had been in Canada for an average of 12 years; however, almost one-third (28.4%) of participants had been in Canada for 20 or more years. Most participants indicated that their small business targets 'the entire Canadian market.' The most frequent entrepreneurial activities and businesses reported were associated with the Food and Beverage industry (24.9%) and the Business and Finance industry (13.1%). The average time in business among participants was 5 to 7 years, with the mean of yearly earned business income ranging from C$30,000.00 to $34,000.00 Canadian.

Common challenges in starting and expanding businesses included financial struggles, navigating through regulations and the tax system, choice of location and industry, and marketing and advertising. Technical, business, and language fluency issues; lack of a network; and unfamiliarity with Canada's business culture, though repeatedly mentioned as barriers by participants in the interviews, were less frequently reported in the survey. The need for supportive services in establishing entrepreneurship was reported by 58% of participants, while only 16% of participants reported receiving support outside of their family.

Participants reporting higher yearly income through their own businesses were individuals who have lived longer in Canada, who did not feel the need to access support services, and who are solely self-employed. Other variables of high significance that correlated with participants success – in which success is associated with higher yearly income – included having more Canadian working experience, a higher level of training or education, and a stronger desire to be an entrepreneur specifically. Survey findings suggest that newcomers who are 'pushed' into entrepreneurship due to difficulties finding full-time employment in Canada, dissatisfaction with their previous job, or discrimination will experience less success than entrepreneurs who have not had such experiences." 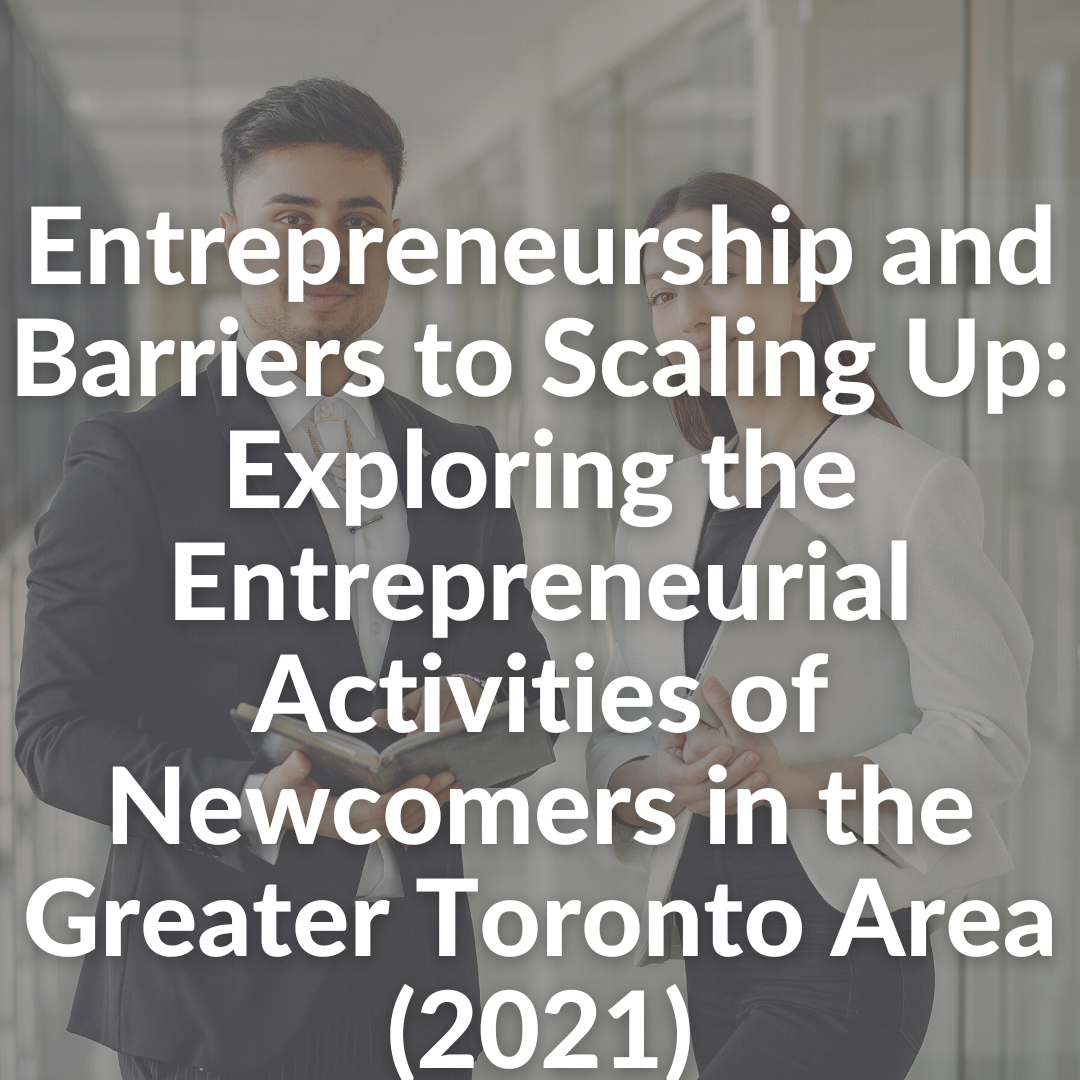 This study explores entrepreneurship as an option for economic integration for newcomers living in the Greater Toronto Area.