Jangles Productions was contracted by Citizenship and Immigration Canada Ontario Region in August of 2009 to conduct a print campaign to promote three settlement services:

This was the fifth campaign carried out to promote these agencies/services. It consisted of:

The results of this print campaign were quite positive. There were more than 6.4 million impressions from the combined circulation figures of all 22 ethnic publications over the six month period. The 10 Newcomer Information Centres (NIC) posted significant increases. For March/10 the Toronto sites were the highest on record for new clients served while the Ottawa site saw a 100% increase in new and repeat clients for December/09. The six NIC sites operated by Centre for Education and Training (CET) showed dramatic increases of over 100% in October/09 and 110% in November/09 compared to the year before.Findhelp information Services 211 Toronto posted an18% increase in monthly calls in March/10 compared to February/10 and 211 Peel indicated a 110% increase in November/09 compared to November/08. OCASI’s website www.settlement.org showed a 40% increase in unique users (first time users) in March/10 compared to December/09.

The strategy of communicating with newcomers in their first language by targeting ethnic communities at the “grass-roots” level has proven itself over and over again as an effective means of reaching immigrants. Jangles Productions recommends Citizenship and Immigration Canada continues this campaign on a yearly basis. At the conclusion of this fifth campaign this approach of advertising directly to newcomers in their first language and in the communities where they live has proven itself as a successful method of promoting newcomer services

For the next print campaign Jangles Productions recommends the following: 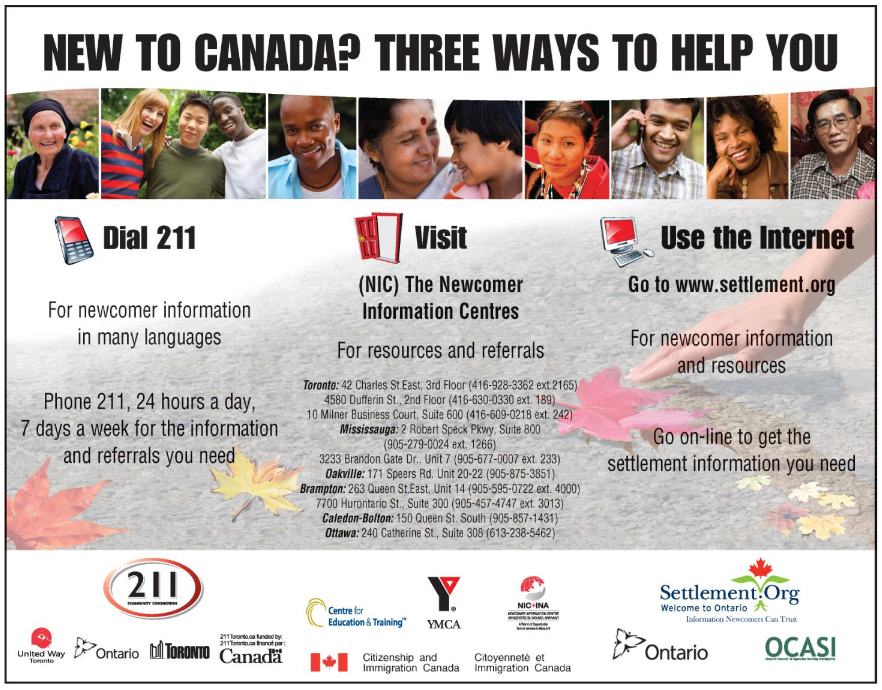 Jangles Productions was contracted by Citizenship and Immigration Canada Ontario Region in August of 2009 to conduct a print campaign to promote three settlement services.