How Much Do They Make? New Evidence on the Early Career Earnings of Canadian Post-Secondary Education Graduates by Credential & Field of Study

The decision to further one’s education and training has important individual and societal implications.

Choices about post-secondary education (PSE) launch individuals onto their future educational and career paths. These decisions are vitally important to Canada’s economic prosperity as well to many individual and social outcomes. Against this backdrop, this joint LMIC-EPRI report provides extensive new evidence on the labour market earnings of PSE graduates.

Our analysis makes extensive use of the new Education and Labour Market Longitudinal Platform (ELMLP), developed by Statistics Canada and Employment and Social Development Canada. The ELMLP allows us to identify all college and university graduates from publicly funded Canadian PSE institutions from 2010 through 2014. We then track their annual employment earnings from the first year following graduation through 2015. This report focuses on individuals who graduated in 2010, since they have the longest earnings history observed on the current platform (2011–2015).

Our aim is to provide all PSE stakeholders — students, parents, institutions, policy makers, researchers and the broader Canadian public — with new earnings information that will help them make the most informed decisions possible. To that end, the report also is complemented by an interactive dashboard, allowing readers to explore the data further, according to their own interests and needs.

While salary is only one factor that Canadians consider when deciding to pursue PSE, our research indicates that it is the most sought after one by students. Other potentially important labour market outcomes are not yet available in the current ELMLP data environment, including benefits, contract status and hours worked.

For a decision of such magnitude, earnings should be used in combination with other information, along with guidance from family and others. One’s personal interests and abilities, of course, should also be taken into account.

Five years after graduation, earnings vary widely by field of study within credentials, with the top fields earning between 40% and 60% more than graduates from fields with the lowest earnings.

On average, graduates in Architecture, engineering and related technologies earn the most among college-level certificate, college-level diploma and bachelor’s degree students five years after graduation (respectively, $60,500, $64,500 and $80,400). Among master’s and doctoral graduates, those from Business, management and public administration earn the most ($103,800 and $123,600, respectively).

At the other end of the spectrum, graduates in the Humanities with collegelevel certificates and diplomas and doctoral degrees, and graduates in Visual and performing arts, and communication technologies with bachelor’s and master’s degrees earn the least. These graduates earn between 43% less ($27,500) for college-level diplomas and 61% less ($62,800) for master’s degrees than those from the highest earning fields of study.

The exception to these large differences is among professional degree graduates, for whom only two fields of study are observed: Social and behavioural sciences, and law and Health and related fields. Graduates from these two fields (primarily doctors and lawyers) earn essentially the same amount five years after graduation.

In every field of study, women earn less than their male counterparts five years after graduating and in the vast majority of cases average gender earnings differences increase from year one to year five.

Across the six credentials, women earn 2% to 21% less than men in their first year following graduation. This difference grows to between 16% (doctoral degree) and 34% (college-level certificate) after five years.

Averaging across all credentials, women earn 12% ($5,700) less than men one year after graduation. This difference widens every subsequent year, in both absolute and relative terms, to 25% ($17,700) five years after graduation.

Gender earnings differences vary by field of study — in some instances substantially — and increase over time in the vast majority of cases. Of our 51 credential and field of study categories, women earn more than men in only three cases in the first year after graduating. By the fifth year, women earn less than men in every case.

For instance, five years after graduating, female college-level certificate and diploma holders in Education earn about 45% ($28,500) less than their male counterparts. For master’s degree holders in Visual and performing arts, and communication technologies, and Business, management and public administration, women earn 32% less than men ($16,800 and $39,600, respectively). In some fields, however, the differentials are considerably smaller. For bachelor’s degree graduates in Health and related fields, women earn 1.9% ($1,300) less than men.

International students who stay and work in Canada earn less than their Canadian counterparts, but the differences narrow over time.

Across four of the five credentials observed, international students earn between 17% and 38% less than Canadians one year after graduation. However, these differences narrow to between 5% (doctoral degree) and 20% (master’s degree) five years out. Among college-level certificate graduates, international students have similar earnings to Canadian graduates.

Taking graduates at all credential levels together, international students who graduated in 2010 and then stayed and worked in Canada earned 21% ($9,000) less than Canadian graduates one year following graduation.

By field of study, only international students with master’s degrees in Mathematics, computer and information sciences, and Health and related fields earn more than their Canadian counterparts — an additional 7.8% ($5,800) and 6.0% ($4,600) five years after graduating. Two of the largest differences observed are also among master’s degree holders. Master’s graduates in Business, management and public administration, as well as Education, earn 35.5% ($37,800) and 40.0% ($32,400) less than Canadian graduates.

In contrast to the patterns observed by gender, the earnings differences between Canadian and international student graduates tend to narrow over time in relative terms.

Graduates are doing well, on average, but the spread between higher and lower earners is wide and grows over time within each credential.

Credentials with higher average earnings (i.e., professional, doctoral and master’s degrees) are associated with wider distributions of earnings across graduates. The spread between the lowest (10th percentile) and highest (90th percentile) earners is $80,200 for professional degrees, $90,800 for master’s degrees and $94,900 for doctoral degrees in the first year after graduation. In all cases, the absolute gap between the highest and lowest earners increases over time. The difference reaches $126,700 for professional degree holders five years after graduation, and $106,800 and $110,100 for master’s and doctoral degrees.

The spread among college-level certificate and bachelor’s degree graduates rises from approximately $58,100 to $76,100 from the first to the fifth year following graduation. The earnings differential between the highest and lowest college-level diploma holders starts at $46,300 in year one and rises to $65,900, representing the smallest spread among all credentials.

Forthcoming research will build upon this report to provide additional information to support the decision-making of Canadians.

This report provides new and comprehensive evidence on the early career earnings of Canadian PSE graduates. A forthcoming EPRI-LMIC report will provide a comparable analysis of the earnings of those who complete registered apprenticeship programs. Taken together, these reports and related materials, including the interactive dashboard, will provide expansive new information on the earnings of PSE graduates and apprenticeship completers. This information will help Canadians make the most informed education and training decisions possible.

The ELMLP has a variety of limitations that affect the type of information that can be presented. However, Statistics Canada is working on adding more data to the ELMLP that will allow for a more detailed and extended analysis. This will include the introduction of new data sources, such as the 2016 Census and the Immigration Longitudinal Database (IMDB). Furthermore, as additional years of data are added, the ELMLP will include new cohorts of graduates, allowing them to be followed for increasingly longer intervals, thereby remaining a valuable source of labour market information. 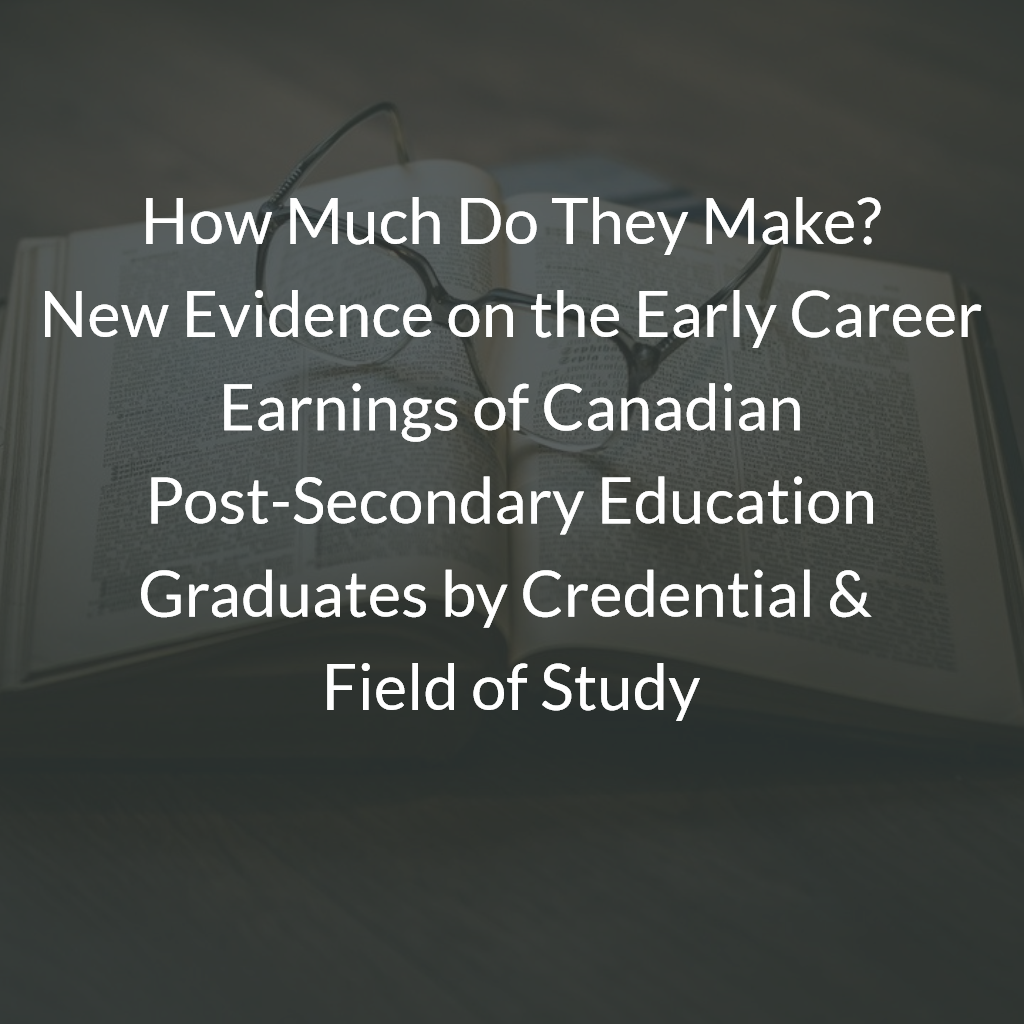 Choices about post-secondary education (PSE) launch individuals onto their future educational and career paths. These decisions are vitally important to Canada’s economic prosperity as well to many individual and social outcomes. Against this backdrop, this joint LMIC-EPRI report provides extensive new evidence on the labour market earnings of PSE graduates.