The effect of immigration on the receiving country’s economy is an issue of intense policy and academic discussion. Previous studies on the impact of immigration on productivity in developed countries remain inconclusive, and most analyses are abstracted from firms where production actually takes place.

An emerging, yet still scant, body of studies has examined the effect of immigration on firm productivity in the U.S. and some European countries. These studies suggest that immigration can either negatively or positively affect the receiving country’s labour productivity through: changes in the factors of production; changes in skill content of labour; efficient labour specialization; and innovation activities in the firm. On the one hand, if a large supply of immigrant labour, and especially a large increase in the supply of lower-skilled immigrants reduces the costs of less skilled labour, immigration encourages firms to become more labour intensive and therefore reduces capital intensity and labour productivity. Furthermore, an increase in the share of lower skilled immigrants in a firm tends to lower the overall skill content of labour in a firm with a negative effect on labour productivity as immigrants often receive lower wages (a proxy for utilized skills) than the native-born workers.

On the other hand, if immigrants bring skills that are complementary to domestic-born workers and highly educated immigrants are more innovative than the domestic-born, the increase in immigration may increase specialization both within the firm and across firms in a local labour market, and stimulate innovation and the adoption of new technology in the firm, all of which contribute positively to labour productivity.

Researchers used a data file derived from linking the Canadian Employer-Employee Dynamics Database that tracks firms over time with the Longitudinal Immigration Data file (IMDB) that includes sociodemographic characteristics at landing for immigrants who arrived in Canada after 1980.

Over a 10-year period, a firm that increased its share of immigrant workers by 10 percentage points experienced on average a 1.9% increase in productivity. This result is obtained after controlling for industry, province, capital intensity and firm size. It is also found that immigration has little effect on capital intensity.

For the period from 2000 to 2015, immigrants who arrived in Canada after 1980 made up, on average, 13.5% of workers in firms with at least 20 employees. The average increase in this share across firms over 10-year periods was 0.58 percentage points. Changes in the share of immigrants in a firm's employment varied greatly, typically ranging from a 15 percentage point increase to a 15 percentage point decline. The effects of immigrants on firm productivity varied considerably by immigrant characteristics and by industry sectors. The effect was higher for low-skilled/less-educated immigrants as compared with highly-skilled/university-educated immigrants. Those differences were more pronounced in technology-intensive and knowledge-based industries. The largest increase was for immigrants with official language skills and with university education. The smallest change was for immigrants who intended to work in science, technology, engineering, math and computer science (STEM) occupations.

The positive effect of immigration on productivity is consistent with the proposition that immigrants are complementary to native-born workers in terms of skills and firms increase job/task specialization to benefit from the comparative advantages of immigrants and native-born workers. It is also possible that technology-intensive or knowledge-based industries require a high degree of division of labour and specialization of functions.

This study also considers the effects of immigrants by length of stay in Canada, education, language, and immigration class. Economic-class or skilled principal applicants, who are selected for economic reasons, may have a stronger effect on productivity growth than other immigrants. By focusing on economic class principal applicants, we also have information about the skill level of their intended occupations and can identify intended Science, Technology, Engineering, and Math (STEM) workers.

Immigrant and refugee-serving organizations and advocacy groups have another empirical piece of research to support their work encouraging Canadian employers to hire newcomers. This research is consistent with other research showing the positive impacts of hiring newcomer talent, as well as the net positive impact of diversity and inclusion efforts by employers. 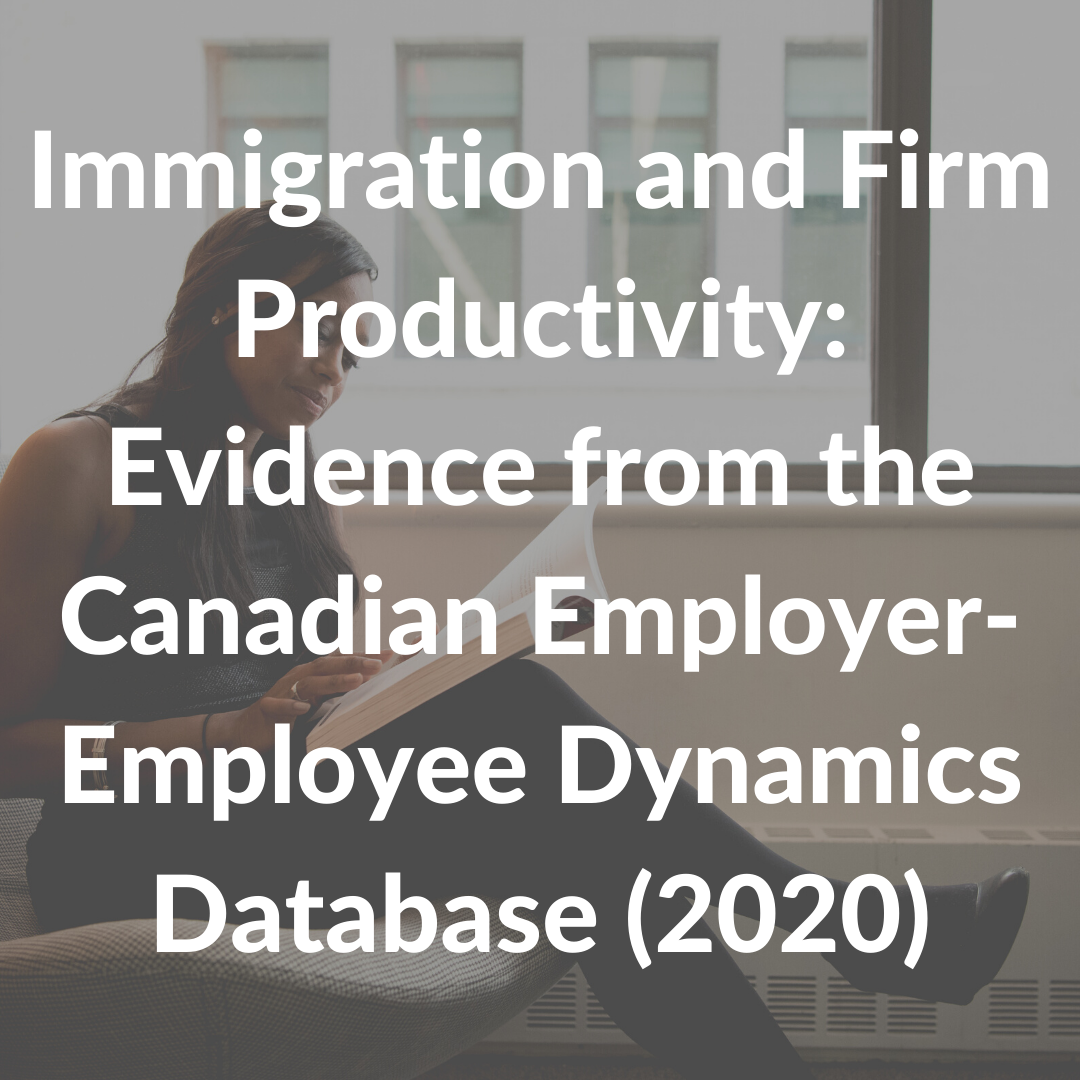 This study examines the empirical relationship between immigration and firm-level productivity in Canada.