“Many immigrants experience discrimination. In this paper we consider how discrimination affects their trust. We make a theoretical case for a formal mediation approach to studying the immigration, discrimination, and trust relationship. This approach shifts attention to the basic fact that the overall levels of discrimination experienced by different immigrant and native-born groups are not the same. We also build on previous empirical research by considering multiple forms of discrimination, multiple types of trust and multiple immigrant/native-born groups. Drawing on the 2013 Canadian General Social Survey data (N = 27,695) we analyze differences in three kinds of trust (generalized trust, trust in specific others, and political trust), and the role of perceived discrimination (ethnic, racial, any), between five immigrant-native groups (Canadian-born whites, Canadian-born people of color, foreign-born whites, foreign-born people of color, and Indigenous people). We find that perceived discrimination is more relevant to general trust and trust in specific others than to political trust. We also find that perceived discrimination explains more of the trust gap between racialized immigrants and the native-born than the gap between non-racialized immigrants and the native-born. The results illustrate that what appears to be a simple relationship is far more complex when attempting to explain group differences.”

“Tensions with Muslims over the Burkini in France, support for the exit of the U.K. from the European Union, and even the recent debates about foreign home ownership in Canada clearly illustrate the challenges facing immigrant minorities in many countries. Underlying these challenges is a crisis of trust—a widening trust gap between immigrant and racialized minorities and majority populations in institutions and authorities.

But noting that there is a crisis of trust related to minority groups does not explain why it occurs. Minority group status is merely a container or “black box” for other experiences and characteristics (Tilly, 2001; Reskin, 2003). There is a need to identify the mechanism, that is, the process or set of experiences, through which these status group markers connect to trust. This paper contributes to this endeavor by considering the extent to which discrimination is the mechanism that might account for group differences in trust. Although it is widely believed that ethnic and racial gaps in trust stems from discrimination this argument has yet to be directly tested.

If discrimination matters for the native-born this means that, irrespective of whether immigrant minority groups “catch up” in terms of other factors that affect trust, there is unlikely to be a catching up effect in terms of the trust of the second generation. This may in part explain why, even though Canada is generally a high trust country, it has not been immune to trust challenges: Black Lives Matter has resonated with the experiences of many in Canadian cities, Francophones consistently trust less, and there is an Inquiry into Murdered and Missing Indigenous women. None of the first two are recent immigrant groups and the third is Indigenous.

These results do, however, depend on the type of trust. In the case of political trust, the results help to explain previous work showing that members of some minority groups have higher political trust than majority group members. We find that individuals who are foreign-born show no difference in political trust or actually trust more than Canadian-born whites. This occurs because of competitive mediation, that is, a pattern where the mediated and direct effect are approximately the same size but operate in different directions (see Zhao et al., 2010). That the direct effect of being foreign-born is positive is likely because institutions in Canada are generally trustworthy—at least on a global scale and hence minority groups often look to the state for protection (Maxwell, 2010). However, this relationship does not appear to exist for those who have directly experienced discrimination. A further issue is that, in the case of political trust, for Indigenous peoples political it is lower and this is exacerbated by the direct experience of discrimination. All too often this group is omitted from the nativity-immigrant comparison, and it must be acknowledged that the distinction of place of birth may be irrelevant to many Indigenous peoples (e.g., see Deer, 2011; Fenelon, 2016).

Finally, there are a number of avenues for further research that emerge from the work presented here. First, the mediation approach used in this paper could be use either to explain gaps in other outcomes that vary between immigrants and the native-born. This might include economic outcomes such as income, political outcomes such as voting and social outcomes such as well-being and happiness. Second, the mediation approach could be extended to considering the role of other types of mediators including, demographics, socio-economic resources, and social capital. Although discrimination was often the most important factor this was not across the board and, in most instances it is partial mediation ranging from about 20–50%. Thus, about 50% in the gap in trust still requires explanation. Third, is that although we have focused on the direct experience of discrimination we do not wish to suggest that discrimination does not also matter because of its relationship to other trust correlates. Take, for example, education which is a form of human capital that leads to higher trust10. In the case of immigrants and racialized minority groups, in addition to overt discrimination, there are also specific discriminatory and colonial institutional histories that lead to lower general levels of the very factors such as education that in turn predict overall levels of integration and well-being.”

2019-07 : Invisibility of Racism in the Global Neoliberal Era: Implications for Researching Racism in Healthcare

2019-05 : Why We Should Care About Regional Origins: Educational Selectivity Among Refugees and Labor Migrants in Western Europe

2019-05 : Dominant Cultural and Personal Stigma Beliefs and the Utilization of Mental Health Services: A Cross-National Comparison

2019-03 : The Effects of Perceived Neighborhood Immigrant Population Size on Preferences for Redistribution in New York City: A Pilot Study

2019-02 : Prejudice Against Immigrants Symptomizes a Larger Syndrome, Is Strongly Diminished by Socioeconomic Development, and the UK Is Not an Outlier: Insights From the WVS, EVS, and EQLS Surveys

2018-11 : Satisfied With Less? Mismatch Between Subjective and Objective Position of Immigrants and Native-Born Men and Women in the Labor Market 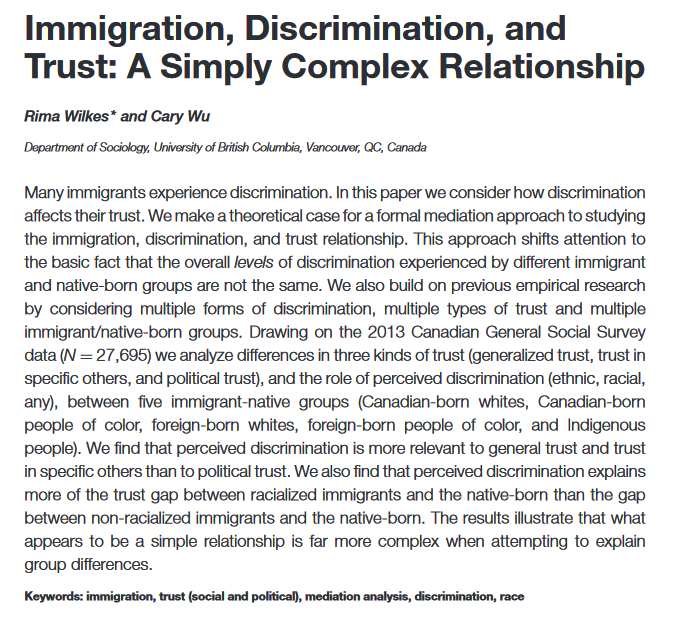