Mapping migration studies: An empirical analysis of the coming of age of a research field

“Migration studies have developed rapidly as a research field over the past decades. This article provides an empirical analysis not only on the development in volume and the internationalization of the field, but also on the development in terms of topical focus within migration studies over the past three decades. To capture volume, internationalisation, and topic focus, our analysis involves a computer-based topic modelling of the landscape of migration studies. Rather than a linear growth path towards an increasingly diversified and fragmented field, as suggested in the literature, this reveals a more complex path of coming of age of migration studies. Although there seems to be even an accelerated growth for migration studies in terms of volume, its internationalisation proceeds only slowly. Furthermore, our analysis shows that rather than a growth of diversification of topics within migration topic, we see a shift between various topics within the field. Finally, our study shows that there is no consistent trend to more fragmentation in the field; in contrast, it reveals a recent recovery of connectedness between the topics in the field, suggesting an institutionalisation or even theoretical and conceptual coming of age of migration studies.”

“This article offers an inductive mapping of the topical focus of migration studies over a period of more than 30 years of development of the research field. Based on the literature, we expected to observe increasing diversity of topics within the field and increasing fragmentation between the topics, also in relation to the rapid growth in volume and internationalisation of publications in migration studies. However, rather than growth and increased diversity leading to increased fragmentation, our analysis reveals a complex picture of a rapidly growing field where the diversity of topics has remained relatively stable. Also, even as the field has internationalised, it has retained its overall connectedness, albeit with a slight and temporary fragmentation at the turn of the century. In this sense, we can argue that migration studies have indeed come of age as a distinct research field.

In terms of the volume of the field of migration studies, our study reveals an exponential growth trajectory, especially since the mid-1990s. This involves both the number of outlets and the number of publications therein. There also seems to be a consistent path to internationalisation of the field, with scholars from an increasing number of countries publishing on migration, and a somewhat shrinking share of publications from Anglo-American countries. However, our analysis shows that this has not provoked an increased diversity of topics in the field. Instead, the data showed that there have been several important shifts in terms of which topics have been most prominent in migration studies. The field has moved from focusing on issues of demographics, statistics, and governance, to an increasing focus on mobilities, migration-related diversity, gender, and health. Also, interest in specific geographies of migration seems to have decreased.

These shifts partially resonated with the expectations derived from the literature. In the 1980s and 1990s, we observed the expected widespread interest in culture, seen in publications dealing primarily with ‘education and language training’, ‘community development’, and ‘intercultural communication’. This continued to be the case at the turn of the century, where ‘identity narratives’ and ‘cultural diversity’ became prominent. The expected focus on borders in the periods (Pedraza-Bailey, 1990) was represented by the high proportion of research on the ‘governance of migration’, ‘migration flows’, and in the highly connected topic ‘intra-EU mobility’. Following Portes (1997), we expected ‘transnational communities’, ‘states and state systems’, and the ‘new second generation’ to be key themes for the ‘new century’.

Transnationalism shifts attention away from geographies of migration and nation–states, and indeed, our study shows that ‘geographies of migration’ gave way to ‘mobilities’, the most prominent topic in the last decade. This trend is supported by the focus on ‘diasporas and transnationalism’ and ‘identity narratives’ since the 2000s, including literature on migrants’ and their descendants’ dual identities. These developments indicate a paradigmatic shift in migration studies, possibly caused by criticism of methodological nationalism. Moreover, our data show that themes of families and gender have been discussed more in the 21st century, which is in line with Portes’ predictions.

The transition from geographies to mobilities and from the governance of migration to the governance of migration-related diversity, race and racism, discrimination, and social–psychological issues indicates a shifting attention in migration studies from questions of ‘who’ and ‘what’ towards ‘how’ and ‘why’. In other words, a more nuanced understanding of the complexity of migration processes and consequences emerges, with greater consideration of both the global and the individual levels of analysis.

However, this complexification has not led to thematic fragmentation in the long run. We did not find a linear trend towards more fragmentation, meaning that migration studies have continued to be a field. After an initial period of high connectedness of research mainly coming from America and the UK, there was a period with significantly fewer connections within migration studies (1998–2007), followed by a recovery of connectedness since then, while internationalisation has continued. What does this tell us?

We may hypothesise that the young age of the field and the tendency towards methodological nationalism may have contributed to more connectedness in the early days of migration studies. The accelerated growth and internationalisation of the field since the late 1990s may have come with an initial phase of slight fragmentation. The increased share of publications from outside the USA may have caused this, as according to Massey et al. (1998), European migration research was then more conceptually dispersed than across the Atlantic. The recent recovery of connectedness could then be hypothesised as an indicator of the field’s institutionalisation, especially at the European level, and growing conceptual and theoretical development. As ‘wisdom comes with age’, this may be an indication of the ‘coming of age’ of migration studies as a field with a shared conceptual and theoretical foundation.” 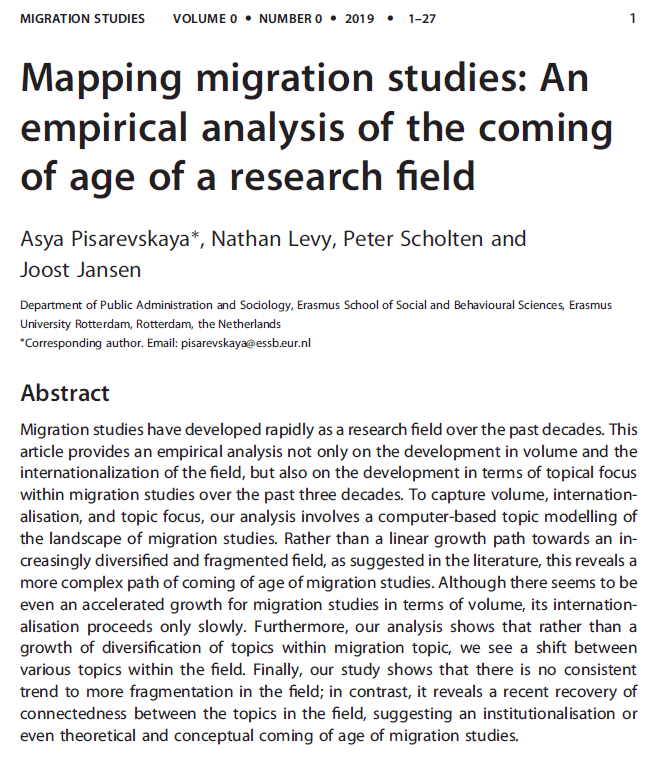