More Than a Place of Refuge: Meaningful engagement of Government-assisted refugees in the future of work (2020)

“The evolution of the Canadian labour market threatens to aggravate the challenges facing resettled refugees. We propose six recommendations for the Government of Canada to better support GARs to succeed in the labour market.”

“In 2017, the United Nations High Commissioner for Refugees (UNHCR) praised Canada for resettling 46,700 refugees the previous year, stating it was ‘the largest amount of refugees admitted [to] Canada since the implementation of the 1976 Immigration Act.’ The demand for safe havens such as Canada is expected to only grow due to the effects of various global crises, including climate change. According to the UNHCR, there are 70.8 million displaced people worldwide, 25.9 million of whom are refugees. Through its Immigration Levels Plan, Canada remains committed to continuing to admit a stable number of refugees moving forward.

With such a commitment, it is important for Canada to ensure it adequately supports refugee newcomers to successfully transition into meaningful employment. The evolution of the Canadian labour market threatens to aggravate the challenges facing resettled refugees. This applies especially to government-assisted refugees (GARs), who tend to have the most difficulty transitioning into work in Canada due to lower skills levels and a lack of social networks, among other compounding barriers — including discrimination. Indeed, only 57 percent of GARs reported employment income within five years of arrival. The evolving labour market is likely to compound the challenges facing GARs, as labour demand declines overall and shifts towards a greater emphasis on social skills — which are culturally mediated and subject to bias in their assessment by potential employers.

We propose six recommendations for the Government of Canada to better support GARs to succeed in the labour market. The first of these focuses on settlement services and we recommend the government support the development of collaborative options for GARs to simultaneously improve language skills, acquire Canadian work experience and earn wages. We further recommend the government make efforts to help GARs build social capital through its settlement programs.

Other recommendations focus on the income assistance the federal government provides to GARs during their first year in Canada. We recommend reducing the claw-back on federal income assistance for earned income by recipients to encourage GARs to find employment, as the current claw-back rate greatly undercuts the incentive to work. The government should also extend eligibility for federal income support to 24 months so that this threshold can be more relevant to the actual settlement pathways of GARs.

Our additional recommendations focus on issues that impact both GARs and other populations, specifically, data collection and combatting discrimination. The federal government should direct Statistics Canada to work with partners to collect and deploy timely data on resettled refugee experiences with social programs and employment. Finally, government should establish a national strategy to combat discrimination, with an emphasis on Islamophobia and anti-black racism, which tend to disproportionately affect resettled refugee groups.

The report uses the term ‘former refugee’ because refugee is not an enduring description of someone’s status in Canada. Once GARs arrive in Canada they are granted permanent residency status and no longer refugees. We think it is important to acknowledge them as such.

Recommendation 1: The Government of Canada should support the development of collaborative options in which GARs can access programs to simultaneously improve their language skills while acquiring Canadian work experience and earning wages.

Recommendation 2: The Government of Canada should support the prioritization of creating enhanced social capital for GARs through an emphasis on social bridging/integration.

Recommendation 3: The Government of Canada should reduce the amount of the claw-back on income above 50 percent of the Resettlement Assistance Program amount from 100 percent to 50 percent to encourage former refugees to find full-time employment.

Recommendation 4: The Government of Canada should extend Resettlement Assistance Program eligibility to 24 months.

Recommendation 5: The Government of Canada should direct Statistics Canada to work with federal ministries, provincial governments and settlement agencies to collect and publicly distribute relevant, updated and on-time data regarding newcomer refugees, and especially relating to uptake of different social programs and employment.

Recommendation 6: The Government of Canada should establish a national strategy to combat discrimination against former refugees, with an emphasis on Islamophobia and anti-black racism.

The report is also available in French. 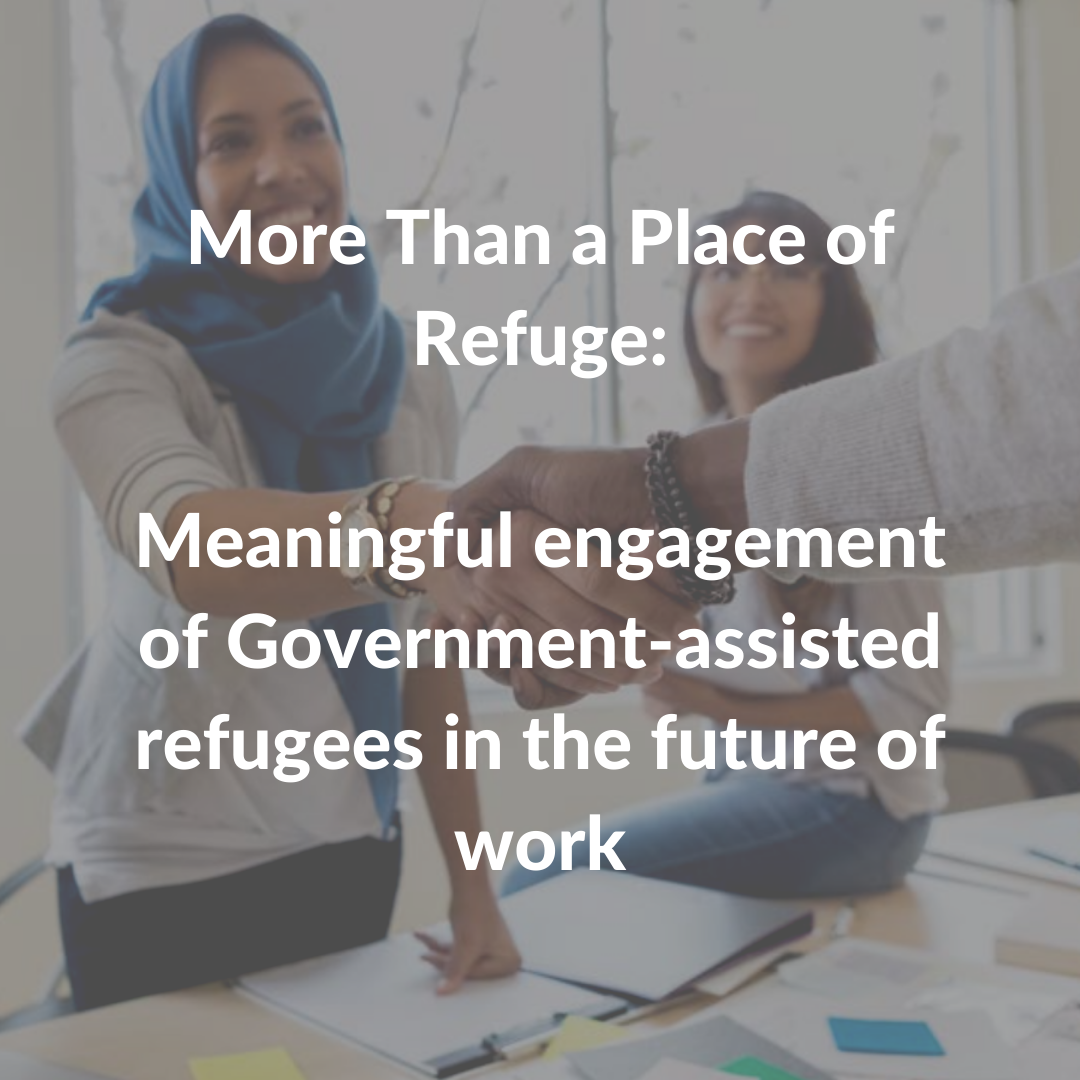 The evolution of the Canadian labour market threatens to aggravate the challenges facing resettled refugees. This report proposes six recommendations for the Government of Canada to better support Government Assisted Refugees (GARs) to succeed in the labour market (2020).