On Digital Passages and Borders: Refugees and the New Infrastructure for Movement and Control

Since 2014, millions of refugees and migrants have arrived at the borders of Europe. This article argues that, in making their way to safe spaces, refugees rely not only on a physical but increasingly also digital infrastructure of movement.

Social media, mobile devices, and similar digitally networked technologies comprise this infrastructure of “digital passages”—sociotechnical spaces of flows in which refugees, smugglers, governments, and corporations interact with each other and with new technologies. At the same time, a digital infrastructure for movement can just as easily be leveraged for surveillance and control. European border policies, in particular, instantiate digital controls over refugee movement and identity. The authors review the actors, technologies, and policies of movement and control in the EU context and argue that scholars, policymakers, and the tech community alike should pay heed to the ethics of the use of new technologies in refugee and migration flows.

Focusing on the context of the highly mediatized arrival of refugees and migrants at the borders of Europe in 2015–2016, the authors illustrate how refugees, human traffickers, governments, and the private sector interact in this new digital environment. Refugees are able to rely on digital networks to both communicate with distant family members and locate the resources they need. Yet, those same tools are increasingly also used to exploit their vulnerabilities. For instance, the movement of refugees is facilitated by digital platforms provided by multinational corporations. But the design of those platforms is rarely catered toward the specific needs and risks inherent to the refugee experience. Furthermore, refugees must contend with the fact that similar technologies are used by governments to increase their control over borders, migration, and the access to asylum.

The authors examine what they call the new digital passage for movement and explore the inherent tensions that are embedded in the sociotechnical relationships that it enables. They conclude with a discussion of the risks and benefits inherent to the digital passage and urge researchers, policymakers, and the tech community alike to pay heed to the ethical questions surrounding the use of digital technologies in modern migration and refugee flows.

Looking Ahead: Beyond Technological Solutionism

In February 2016, European government and border control officials met with representatives from a variety of tech companies to develop “technical solutions” to the refugee crisis. The proposals range from “a smartcard ID system” for the distribution of food and services to “tempt[ing] refugees to download tracking apps on their smartphones by offering helpful information about sea crossings and conditions in different EU countries” (Taylor & Graham-Harrison, 2016). At the same time, a group of well-meaning computer scientists, engineers, and startup representatives from across the world have joined forces to organize a series of “techfugee” conferences with a similar goal (Techfugees, 2016). The difference lies in how these actors define “the solution”: European government and border control officials are incentivized to utilize digital infrastructures to reinforce physical borders and maximize control over refugees; “digital humanitarians,” on the other hand, may seek to develop technologies to facilitate and support the freedom of movement.

There is no easy answer to the question of whether or not the digital passage ultimately benefits or harms vulnerable populations. However, we would urge academics, policymakers, and the tech community alike to grapple with this question before experimenting with new technologies in the context of refugee and migration flows. Most importantly, we have to remain mindful that there is not, in fact, “an app for everything” (Latonero, 2016a) and meaningfully addressing the current refugee crisis—one that extends far beyond the borders of Europe moreover—also, if not primarily, requires physical assistance on the ground. At the same time, for those cases in which digital technologies can facilitate (or impede upon) the movement of asylum seekers and migrants, the people and institutions demanding and developing those “solutions” need to be cognizant of the particular needs and risks inherent to the refugee experience.

This article has tried to map out the contours of a new digital infrastructure for movement and the ways in which it is navigated by government officials, tech representatives, human traffickers, and the refugees themselves. This focus on refugees exemplifies a broader research approach wherein the dual use nature of technologies can only be understood upon investigating how such technologies play out in specific social contexts—particularly in human rights and humanitarian contexts where vulnerable populations are concerned. As the tools that comprise new digital infrastructures expand in scope and usage in the near future, we should make sure to remain mindful of the ethics of the digital passage, with a particular focus on individual’s fundamental rights to privacy, freedom of movement, asylum, and, above all, human dignity. 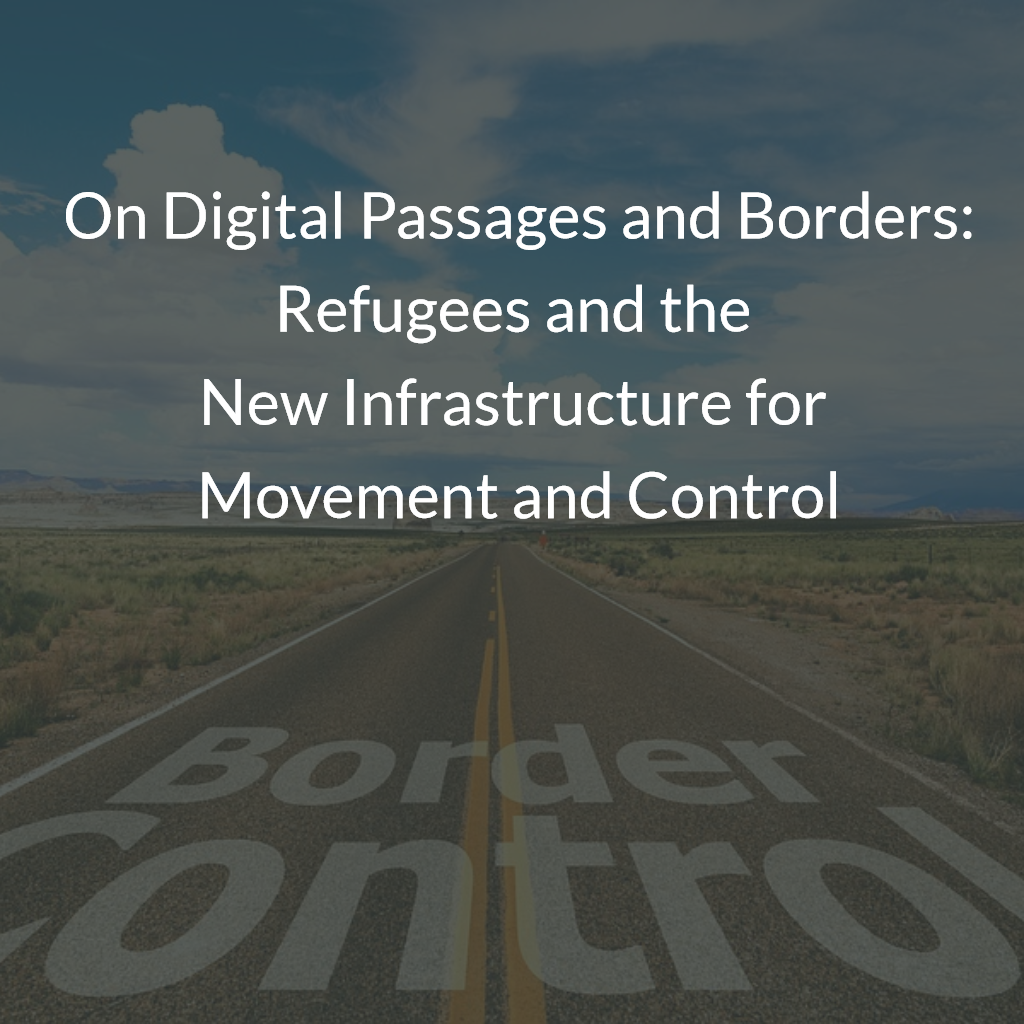 Since 2014, millions of refugees and migrants have arrived at the borders of Europe. This article argues that, in making their way to safe spaces, refugees rely not only on a physical but increasingly also digital infrastructure of movement.