Racism, Discrimination and Migrant Workers in Canada: Evidence from the Literature (2021)

“Canada is celebrated as a diverse, multicultural and inclusive nation, with many accolades to its name, and remains a destination of choice for many immigrants worldwide. It is described, similar to Australia and New Zealand, as a ‘settlement country,’ where settlement is an integral part of nation building and immigration an intrinsic component of the national heritage (Organisation for Economic Co-operation and Development (OECD), 2015). In short, despite some challenges, Canada is lauded as a successful immigrant nation, and perceived, in terms of its skilled migration system, as a ‘benchmark for other countries,’ as supported by its strong integration outcomes (OECD, 2019). While the literature points to ‘cracks’ in the Canadian immigration model, including ‘skilled’ migration, overall it is widely considered as a model to be emulated by other Western industrialized nations – a phenomenon otherwise known as Canadian ‘exceptionalism’ in the context of multiculturalism and immigration policymaking (Triadafilopoulos, 2021).

When it comes to examining racism and discrimination within the Canadian immigration system as a whole, authors point to certain areas that need particular attention, one of which centers, as per the focus of this paper, on temporary migration. Indeed, on the subject of migrant workers, the literature is somewhat more tentative as to Canada’s successes. Accordingly, authors raise concerns that there are ‘two Canadas,’ one of which is constituted by fault lines within temporary migration and defined by ‘zones of exceptionalism’ characterized by substandard labour and social protections as well as restrictions on workers’ mobility. For the majority of authors, ‘race,’ ‘class,’ ‘gender,’ or ‘geography’ (that is, country of origin), but also ‘skill level’ and ‘entry class’ combine with wider historical, and current structures of discrimination to shape the experiences of migrant workers and their migration experience today.

The primary objective of this review is to identify and analyze potential markers of racism and discrimination in immigration policy that impact migrant workers in Canada, most specifically those in the Seasonal Agricultural Worker Program and the Caregiver Streams that are part of the Temporary Foreign Worker Program. The review also examines the International Mobility Program, albeit from a more limited perspective, due to a still nascent, yet fast-growing, literature on the subject. Overall, studies and reports mostly focus on substandard conditions of labour, lack of access, or restricted access, to social services and permanent residence pathways that are typically available to workers from higher-waged and higher-skilled categories. Indeed, most of the literature, including reports from non-profit organizations, and parliamentary committees refer to issues of ‘abuse and exploitation’ in temporary migration programs, including in specific segments of the International Mobility Program.

While on the surface, it may appear that these references are dissociated from the terminologies and practices of racism and discrimination, they are in fact often articulated in the context of the historical racist genesis of the programs, and also to processes of racialization that may be drawn from systemic racism and discriminatory practices. Indeed, there is meaningful literature on the historical formation of temporary programs in Canada, and its relationship to racism and discrimination as constituted through gender, geography, and class. Most scholars suggest that these historical formations are key to understanding the situation facing migrant workers in Canada today as they continue to inform the shape and contents of policy. This is sometimes referred to as history’s ‘ongoing effects’ or ‘lasting impacts.’ In this light, the federal government recognizes that historical practices continue to drive processes of stigma and discrimination for racialized peoples (Public Health Agency of Canada (PHAC), 2020). In the case of migrants, for example, some scholars have drawn connections between systems of indentureship – described as a discriminatory practice – and temporary migration programs. Others point out that the seasonality of the Seasonal Agricultural Worker Program stems from the racist assumption that racialized peoples cannot adjust to the Canadian climate, nor ‘assimilate’ to Canada due to their inherent nature, as another example.

In addition to the above considerations, scholars argue that it is key to be cognizant of the factors surrounding the global movement of migrants from the (mostly poorer) global South to the (mostly richer) nations of the global North, which is marked by migrants remitting to countries of origin; their separation from families; and isolation in their communities in Canada due to long hours of work; live-in arrangements (living with, or in close proximity to, employers), as well as language based, and other, barriers in accessing social benefits, labour protection information and compensation, legal aid, and settlement services. Relatedly, the literature refers to the ‘race’-based and gender-based barriers experienced by migrant workers. Authors point out that these unequal global realities may be replicated within nations, but also within households, for caregivers who still ‘live-in.’

As noted, evidence of exploitative practices abounds within these programs, whether for migrant agricultural workers or caregivers. Caregivers, for example, experience downward social mobility in Canada, tied to the absence of the recognition of their foreign credential experience, but also barriers which prevent further study and/or employment choices. In this context, authors depict racism as a structural barrier and the ‘gendered, racialized, and classed immigration system’ that feed into the downward mobility of female care workers (Lightman et al, 2021). There is also a gendered toll on caregiver mothers whose experiences – not unlike those of migrant mothers in temporary agricultural programs – illustrate the importance of examining these issues with an ‘intersectional’ lens.

The questions underpinning this study, as related to immigration policy, include:

The intent of this paper is not to arrive at a fixed conclusion as to whether racism and discrimination exist within these programs, but rather to raise awareness of the debates within the literature and among experts. Having said this, there is a wide consensus in the literature that questions of ‘race,’ ‘gender,’ ‘class,’ ‘geography’ are inevitable factors that impact policies regarding migrant workers whether in the Temporary Foreign Worker Program or the International Mobility Program.

There is also a wide consensus that, in the case of the Seasonal Agricultural Worker Program and the Caregiver Streams, their unequivocal rootedness in racism and discrimination inform the current nomenclature of immigration policies. In other words, though racism may no longer sustain or substantiate these programs, they may not be free of racism, due to the fact that they arose from racism. Some scholars point out that racism and discrimination are an intrinsic part of the matrix that make up these programs, depicting it as ‘institutional racism.’ Others note that the rootedness of racism within these programs cannot be ignored, and that though explicit racist ideas may no longer sustain them, they may still have a discriminatory impact that prevents the full ‘humanization’ of racialized migrants.

Most authors, and organizations such as the Ontario Human Rights Commission, explain that discriminatory impact is to be assessed by the disproportional outcomes experienced by a social group, in this case, migrant workers. Are they mostly racialized? Do they mostly originate from the global South? Do they experience differential treatment with adverse and disproportionate effects on their health, participation in their communities, places of work and broader experiences? Are their contributions to the Canadian economy and society proportionally recognized? Depending on how one answers these questions, a thoughtful pause on how Canada addresses potential discrimination in temporary migration, may well be warranted.”

Racism, Discrimination and Migrant Workers in Canada - Evidence from the Literature (2021) 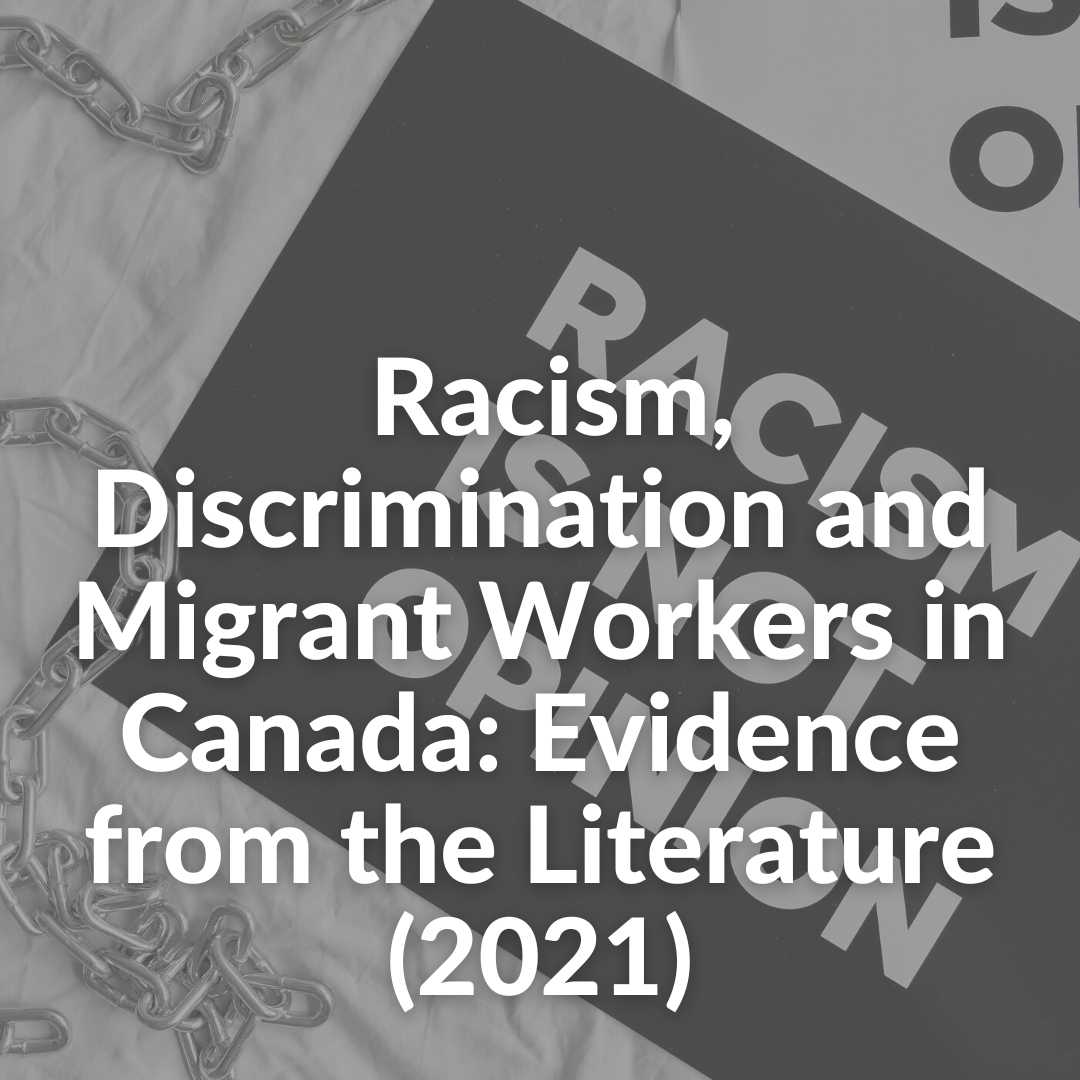 When it comes to examining racism and discrimination within the Canadian immigration system as a whole, authors point to certain areas that need particular attention, one of which centers, as per the focus of this paper, on temporary migration. Indeed, on the subject of migrant workers, the literature is somewhat more tentative as to Canada’s successes.