“Since the 2000s, the growth of information and communications technology has contributed to the growth in international migration. The main reason for this trend is that potential migrants have better access to information about the migration process and post-migration integration challenges (Kotyrlo 2019; Dekker & Engbersen 2014; Thulin & Vilhelmson 2014). Potential migrants will utilize all the information available to them to make the best possible decision before migrating. The internet, and social media in particular, is one of many tools that migrants may access to connect with existing diaspora networks living in the host country that could help them find a job, connect to needed services, or provide information about the host country's labour market. This study will provide new evidence on immigrants’ internet and social media usage for labour market integration from the 2018 Canadian Internet Use Survey. Given the limitations of the survey, I will only be looking at employment as a labour market outcome. I found evidence in the survey that social media users are about 2.3 times more likely to be employed compared to those that were using traditional media like email, telephone and in-person interactions. In addition, I also find that those using the internet to search for employment or for training purposes are twice as likely to be employed. Moreover, there is no evidence to indicate that immigrants using social media or the internet experienced higher employment relative to similar native-born Canadians. These findings remain robust to the inclusion of controls for differences in internet usage across individuals. But the observed effects disappear when including demographic and socio-economic covariates representing the digital divide experienced by immigrants and native-born Canadians.

This study is part of a larger project by the Canada Excellence Research Chair in Migration and Integration program at Ryerson University that studies the impact of pre-arrival social media use on newcomers’ labour market integration. This larger project functions in collaboration with the employment agency A.C.C.E.S Employment (Accessible Community Counselling and Employment Services), which serves a large number of newcomer jobseekers in the Greater Toronto Area. This study serves the larger project by contextualizing social media use by immigrants in Canada. This paper provides evidence from the 2018 Canadian Internet Use Survey on the effect of social media usage, internet usage for employment search and internet usage for training purposes on the employment of immigrants relative to the Canadian-born.

The literature on social networks and migration find that migrants are attracted to destinations where they have larger social networks and can leverage their social capital to smooth the process of integration (Blumenstock, Chi & Tan 2019; Comola & Mendola 2015; Munshi 2014; Patel & Vella 2012; Dolfin & Genicot 2010). Social networks give potential migrants information about the migration process, border crossing, jobs, housing, banking and credit. The presence of family members in the destination country is especially important. Dolfin & Genicot (2010) show that migrants with family in the destination country tend to prioritize job information in the destination country over legal migration processes and border crossing information, which has the effect of increasing the likelihood of illegal migration and use of middlemen in border crossing. Moreover, families do not just provide information, they also supply credit to new migrants, provide accommodation and assistance with jobs (Comola & Mendola 2015; Dolfin & Genicot 2010). On a more general note, family and non-family networks influence migrants’ occupational choices and earnings, such that new immigrants tend to choose the same occupations as established immigrants in their locality, creating local niches and earning them a wage premium (Patel & Vella 2013; Waldinger 1994; Logan, Alba & Zhang 2002). Networks that form beyond family elements, such as caste, origin village or ethnicity can also be beneficial to its community members. Some of these benefits are finding employment, supporting entrepreneurial activity and providing social insurance (Munshi 2014). Due to the benefits of a community network many migrants choose to live in close proximity to co-ethnics, which allows for ease in building networks through interactions without the communication barriers and cost of travel associated with geographic location (Bailey & Waldinger 1991; Chiswick & Miller 1996; Edin, Frederiksson & Aslund 2003; Chiswick & Miller 2005; Bauer, Epstein & Gang 2005; Warman 2007; Damm 2009; Xie & Gough 2011; Beckhusen, Florax & de Graaff 2012; Ghosh 2007; Danzer & Yaman 2016; Danzer, Feuerbaum, Piopiunik & Woessmann 2018; Bredtmann, Nowotny & Pennerstofer 2019; Nowotny & Otten 2020). What is common in the social network literature is the focus on the spatial proximity of community members to form immigrant communities so that the predominant mode of communication in these communities is in-person interaction. The literature on digital diasporas (Keles 2016) and transnational families (Madianou & Miller 2013; Madianou 2015, 2016) look more closely at how other forms of communicating (like social media) unrestricted by geographical boundaries have an impact on the interactions within community networks and families living in the home and host country. However, the digital diaspora literature does not look at labour market issues in sufficient detail. It only briefly touches upon labour market information (such as sharing job advertisements and internship opportunities) and supports (such as community business owners hiring new immigrants, language skills learning and career advice) passed on social networking websites in the destination country (Keles 2016). In this study, I hope to provide some preliminary motivation to further our understanding of how the internet and social media are important tools for newcomers in performing the functions of communicating with social networks and gathering information about the labour market, which in turn can contribute to improvements in their labour market outcomes.

The definition of social media varies across the literature. In this paper, I utilize a working definition for social media that is based off a literature review on social media and migration by McGregor & Siegel (2013): “an internet-based application that allows the creation and exchange of User Generated Content” where User Generated Content is media content (i.e. text, audio, videos or images) created by an end-user of the application. This definition covers the internet used for social networking (such as Facebook, QZone, Google+, Vkontakte, Myspace and Orkut), professional networking (LinkedIn), dating services, sharing self-made content (such as Instagram, Snapchat and TikTok), blogging or microblogging (such as Twitter, Tumblr, Reddit, Baidu Tieba), instant messaging services with group conversation capabilities (such as WhatsApp, Blackberry Messenger, Skype, WeChat, QQ, Viber, LINE and Facebook Messenger), and voice/video calling (such as WhatsApp, Skype, Zoom, Google Meet, Facetime and WeChat). It excludes one-to-one communication through email, instant messaging services and voice/video calling. Although, users may be using a particular platform with both one-to-one and many-to-many communication features. In addition, this definition fits well with the data available in the 2018 Canadian Internet Use Survey.

The survey captures responses from 13,810 residents at least 15 years of age living in a Province in Canada. The survey excludes residents of Yukon, Northwest Territories and Nunavut, and those living in an institution. The survey includes non-immigrants (or Canadian-born) and immigrants (or permanent residents), but does not capture refugees and non-permanent residents such as international students and temporary foreign workers. In addition, this study utilizes the public-use version of the survey, which does not identify the immigrant’s year of landing in Canada and country of origin. The subsample and missing variables might pose a problem because temporary and permanent residents use ICT in very different ways (Acharya 2016; Mikal & Woodfield 2015), and the origin country’s culture has an impact on ICT use especially for immigrant women and children (Acharya 2016). Moreover, established immigrants and Canadian-born are 68% more likely to access the internet than comparable new immigrants, although there were no significant differences in their use of social networking sites (Haight, Quan-Haase & Corbett 2014). Even with these missing pieces in the survey, the data presented in this paper can serve as a starting point for further analysis. Internet use among immigrants is not a new area of research, including the use of the internet to search for employment or training. In a study by Xue (2008), newcomers to Canada from all immigration categories (family, economic and refugees) that were surveyed in the Longitudinal Survey of Immigrants to Canada (2005; waves 1 - 3) said that internet was the most used job search method (58%), followed by networking with family and friends (46%). There were differences across immigration categories. Economic immigrants were more likely to use the internet to search for work, while family class immigrants and refugees relied more on their personal networks. Similar studies in Germany and Israel (Weiskopf & Kissau 2008), Bulgaria, Netherlands and Spain (Reichel, Siegel & Andreo 2015), Sweden (Thulin & Vilhelmson 2014) and the US (Mikal & Woodfield 2015) find that immigrants use the internet to search for job information, language learning, adult education and/or skills training.

How can using the internet improve labour market outcomes for immigrants? The answer to this question is less clear because on the one hand greater internet use and higher labour market outcomes are both attributed to digital skills, which are also highly valued in today’s labour market (Tverdostup & Paas 2018). Even in the early stages of searching and applying for jobs, digital skills are a prerequisite because job applications are predominantly completed online. On the other hand, the internet facilitates the search for employment by providing job market information (Suvankulov, Lau & Chau 2012; Beard, Ford, Saba & Seals 2012; Jansen, Jansen & Spink 2005; Kuhn & Skuterud 2004), opportunities for connection building (Mesch 2011), and is also used for skills training or education (Suh & Hsieh 2018). In this paper, I only look at the latter uses of the internet as a tool to search for employment and training.

This report is part of the CERC in Migration and Integration's Virtual Bridget project: "This research project aims to analyze the potential for Service Provider Organizations (SPOs) to deliver settlement services through social media channels and applications, and to equip SPOs with the knowledge and capabilities that will enable them to increase their digital support to newcomers."

Information and Communication Technology in Migration - A Framework for Applications, Customization, and Research (2022) 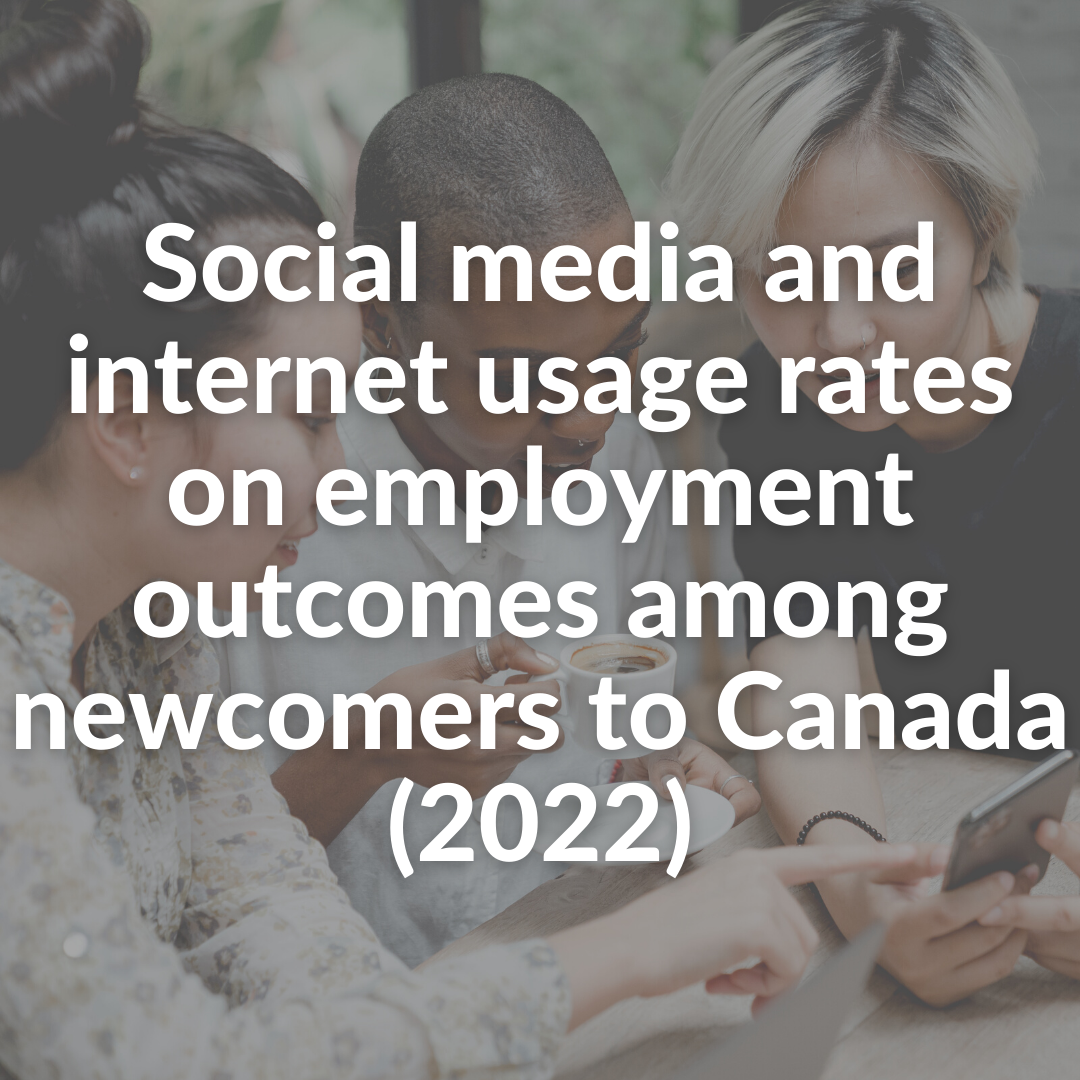