The mental health of immigrants and refugees: Canadian evidence from a nationally linked database (2020)

Overall, immigrants are found to be healthier upon their arrival to Canada than the Canadian-born population—a phenomenon referred to as the healthy immigrant effect (HIE). However, this initial health advantage seems to disappear over time, partly because of stress and other integration challenges.

To answer these questions, the authors also looked at socioeconomic factors and individuals’ sense of belonging.

The Canadian government’s Immigration Levels Plan stipulates that almost 1 million immigrants will be admitted to Canada between 2018 and 2020, and immigrants to Canada will increase from 7.5 million to more than 12 million by 2036 (almost 30% of the Canadian population). Because of the growth in Canada’s immigrant population, it is important to monitor the health—including mental health—of immigrants. In light of the COVID-19 pandemic and its impact on mental health, this study can provide a baseline for future studies on the longer-term impact of COVID-19 on immigrants’ mental health by immigrant category.

Typically, these studies do not have a well-defined Canadian-born comparison group, as the non-links in these record linkage projects include both Canadian-born individuals and more established immigrants. Furthermore, a study based on the Longitudinal Survey of Immigrants to Canada (LSIC) found that refugees had a greater mental health risk than other immigrant subgroups. However, the LSIC did not provide a Canadian-born reference group for comparison.

Linking the Canadian Community Health Survey (CCHS) to the Longitudinal Immigration Database (IMDB) provides opportunities to study the SRMH outcomes of immigrants across admission categories at the national level with a well-defined Canadian-born reference population. This study, based on the linked CCHS–IMDB database, fills an information gap by examining the SRMH of immigrant and Canadian-born survey respondents, controlling for confounding factors. In addition, the mental health of immigrants was examined by three immigration-related dimensions—admission category, source world region and duration since landing. It is important to look at duration since landing to evaluate whether the perceived mental health advantage changes over time. Source world region is important because immigrants’ post-migration mental health outcomes are influenced by differences in language, culture, institutions and politics between Canada and their source country.

This study provides new evidence on immigrants’ mental health. First, there is no significant difference in the unadjusted prevalence of high SRMH between Canadian-born respondents and immigrants overall. When examined by admission category, this finding held true for economic immigrants, but family-class immigrants and refugees were less likely than Canadian-born respondents to have high SRMH. This is consistent with studies that found that economic immigrants tended to have better health outcomes than refugees and—to a lesser extent—family-class immigrants.

Immigrants’ mental health does not improve with time spent in Canada. Recent immigrants have higher unadjusted SRMH than both Canadian-born respondents and established immigrants, reflecting and corroborating evidence of deterioration of the HIE in self-reported health, as well as in mental health outcomes. 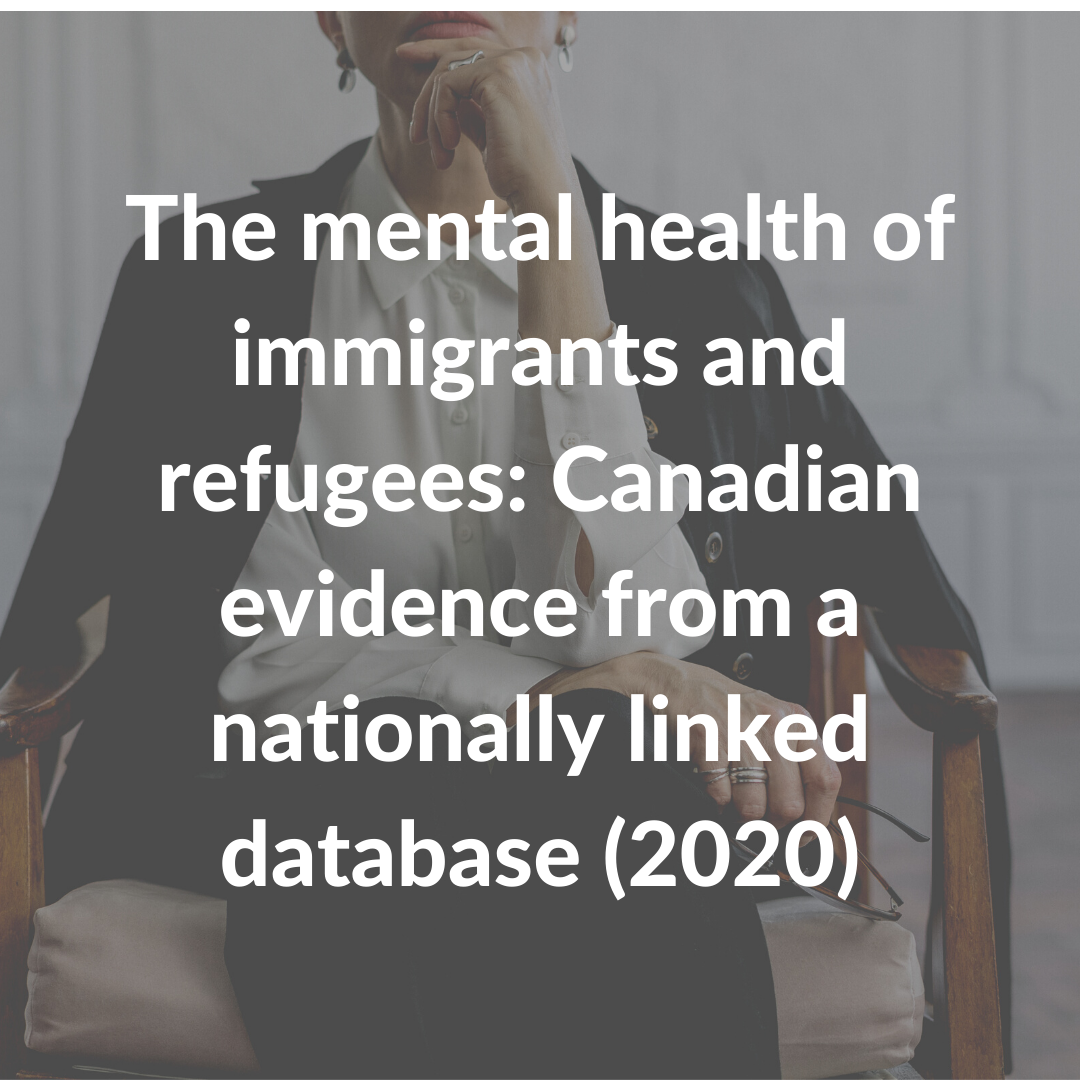 Immigrants are found to be healthier upon their arrival to Canada than the Canadian-born population—a phenomenon referred to as the healthy immigrant effect (HIE). Does self-reported mental health (SRMH) differ between Canadian-born and immigrant respondents?