The Political Process of International Education: Complementarities and Clashes in the Manitoba K-12 Sector through a Multi-level Governance Lens

“International education has become a policy sector of growing importance to Canada. With increased government regulations, disconnect is often observed between the intended policy outcomes and practice. This study aims to explain this disconnect by analyzing the heterogeneity among stakeholder interests. It focuses on 1) distribution of authority; 2) heterogeneity of values; and 3) complementarities and clashes in policy issues. A multi-level governance (MLG) framework (Chou et. al., 2017; Hooghe & Marks, 2003), as a guiding theoretical lens, is applied to examine the interactions among governments (federal-provincial), non-governmental organizations, school administrators, international students and their families in the context of the Manitoba K-12 sector. Data for this study were collected through document analysis and 40 semi-structured interviews. Findings indicate increased steering power of both the federal and provincial governments to regulate international education with conflicting agendas based on political ideologies. The pursuit of Canada’s economic competitiveness through K-12 international education has led to a rise in the authority of non-governmental actors, including parents and students, to shape the services, programs and curriculum content offered by public schools. The study proposes adding an additional layer to the MLG framework, that of the complexities within stakeholder groups.”

“In this paper, we have intended to draw out the complexities and nuances in government policy-making, helping to contribute to the broader understanding of why there is often disconnect between policy and practice when it comes to international education. The following main findings emerged from the analysis.

First, even if there is indirect steering apparent from the federal government in Canada with regards to international education, the ultimate decision-making authority lies with the provincial government. Based on the comparison of the themes that emerged from document analysis and informants’ responses, we found that international education policies as texts can be used to address an actual policy issue (e.g. secure coherence among educational providers as in Manitoba’s IEA; attracting students as potential immigrants), but they can also be used for political purposes without an actual policy problem to advance certain ideologies.

The federal International Education Strategy is an example of an attempt to justify and show support for student mobility trends in Canada that were already happening. In addition, the policy documents analyzed in this study emphasized the economic rationales while the interview participants commented primarily on multicultural rationales for administering the International Student Program. Furthermore, the Manitoba provincial Enrolment Cap Policy is an example of an effort to influence the perception of voters (e.g. no preference given to international students over local students, international students framed as threats to the quality of public education, the enrollment numbers of international students not coming close to the 20% mentioned in the documents). In each of these cases, stakeholders furthered their own political agendas in the process of policy making. Such complexities in values may potentially influence local practices and limiting the learning experiences of both international and local students. This could include limiting the resources provided to the students at the school level, influencing the perceptions of employers, and ultimately restricting ethical practices in international education.

Second, the overall trend apparent among both federal and provincial governments is the increasing governmental participation and regulation of international education despite the autonomy of educational institutions. This mirrors Megarrity’s (2007) observations in the post-secondary context of increased regulation even as governments espouse neoliberal rhetoric of deregulation and market efficiency. Findings that emerge from this study indicate that this tendency is becoming apparent in the K-12 sector as well. This is closely linked with intertwining of international education with Canada’s economic, trade, and immigration interests. As international students are perceived to transition easily into the Canadian labour market with Canadian education credentials and language proficiency, they have become the targets of government immigration policies with various immigration pathways supporting this transition. With increased marketization and competition in the global knowledge economy, national governments are affirming their stronger steering role through regulative policies to secure their competitive edge in a global race for talent and skilled labour.

Manitoba’s Enrolment Cap Policy is an example of a K-12 regulatory policy approach without an actual policy problem to address. Another example of the increasing steering role of the provincial governments, including that in Manitoba, is the signing of agreements with schools overseas regulating which providers can offer provincial curriculum and award Canadian high school diplomas abroad. The tendency to increased regulation reveals the growing importance of the role of international education in Manitoba and Canada in the eyes of government and suggests both federal and provincial governments expect it to continue expanding. As a response to governments’ and educational institutions’ actions under neoliberal pressures, scholars are increasingly calling for the adoption of ethical approaches to internationalization (Stein, Andreotti & Suša, 2019).

Third, we also argue that the blurring of boundaries across the authority and power of educational stakeholders has given an impetus for individual stakeholders, particularly non-governmental stakeholders, to increase their own legitimacy, authority, and power in the international education process. We observed the increasing role of non-governmental organizations (e.g. CAPS-I, MCIE) in K-12 demonstrated by growing memberships and capacity in government lobbying. This finding confirms and adds to the emerging literature, where scholars have documented an increased provincial utilization of control over immigrant selection and the rise of post-secondary educational institutions as non-governmental selection actors for immigration in Canada (Brunner, 2017; McCartney & Metcalfe, 2018). We are witnessing governments incentivizing individual students to invest in their own education, as is evident in growing tuition costs and declining public funding. Consequently, students and their families have gained authority and power in this global market of education as they are courted for the potential economic and cultural benefits they bring to whichever place is able to attract them.

As such, families from privileged socio-economic backgrounds are in the position to influence the services, programs, and curriculum content offered by schools working to stay competitive. This finding aligns with others in the literature concerned with how international education programs in Canada are associated with the increasing privatization of public education. A separate stream of research has suggested that international students from privileged families gain valuable social and cultural capital through educational experiences in Canada (see Bosetti, Van Pelt & Allison, 2017; Waters, 2006). This capital is resulting in a new wave of emerging global dominant elites who have arisen with the help of Canadian public schools. Consequently, international education has become a new type of leverage for some individuals to secure access to the labour market and global mobility, including immigration. As such, we see a growing trend of neoliberal influences, encouraged by the governments and implemented through international education policy. This tendency provides opportunities for powerful non-governmental organizations to shape the administrative practices in K-12 international education.

Finally, the MLG framework’s emphasis on stakeholder interactions across levels, values, and policy issues was helpful, yet it currently does not provide a distinct lens to analyze differences within one group. MLG is useful as a framework that draws attention to those interactions in more comprehensive ways by examining the power dynamic and dependencies between stakeholder groups, providing new understanding of the policy process in international education. However, our findings have shown that we cannot objectively assume that the values and interests within one group are always similar, coherent, and complementary.

Therefore, we propose adding another layer to Chou et al.’s (2017) analytical framework – the complexities within stakeholder groups - for a more cohesive and holistic approach to assessing the political process of international education. The theory focuses on analysis across levels, actors, and policy issues within the multi-level governance framework, yet overlooks the importance of values and norms represented among individuals within one group of actors at one level or related to one policy issue.

Understanding the dynamic of those diverse values and norms represented within a single stakeholder group allows for explaining the power relationships between individuals leading to authoritative distribution of values, a notion that was pointed out in the beginning of the paper. Adding this fourth layer allows for more detailed and informed analysis, which would help to show the nuanced complexities within multi-level governance theory and explain the disconnects and differences in the processes of policy formulation and implementation.” 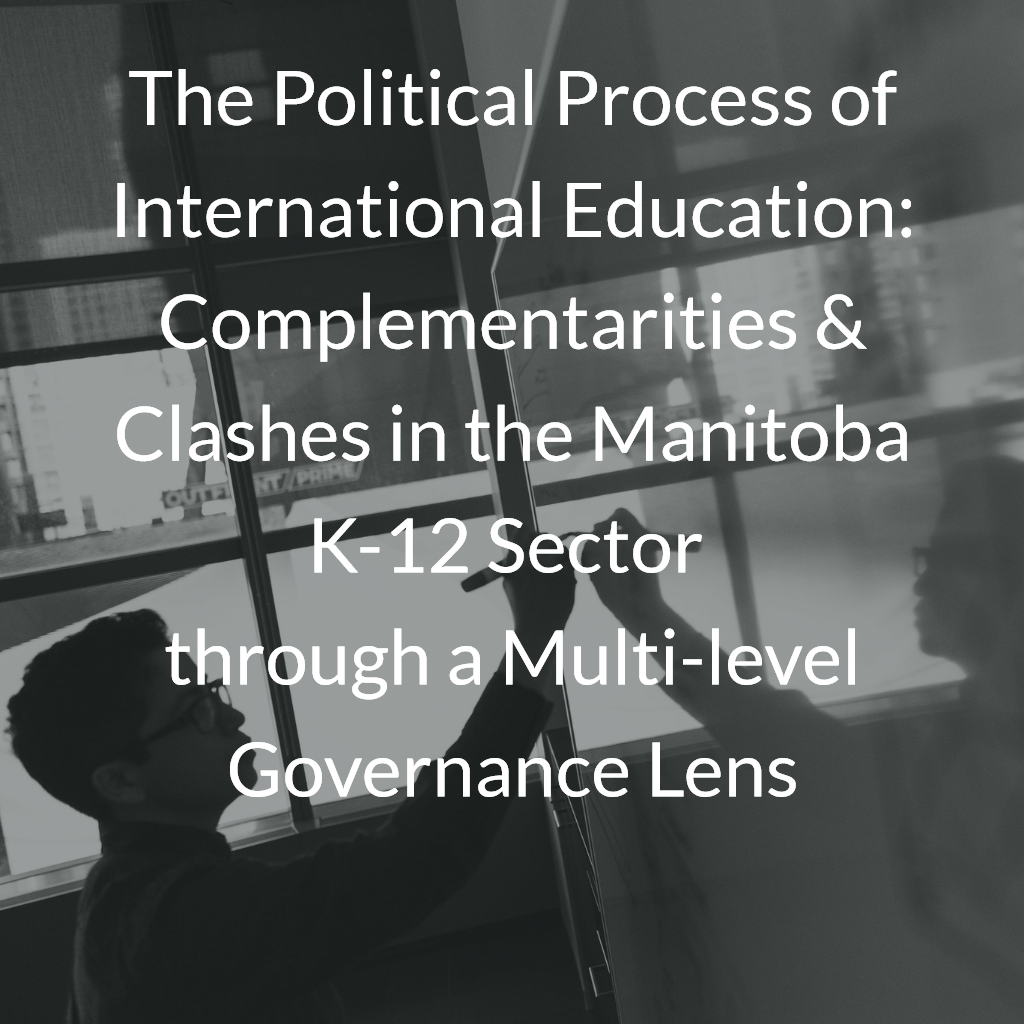 International education has become a policy sector of growing importance to Canada. With increased government regulations, disconnect is often observed between the intended policy outcomes and practice. This study aims to explain this disconnect by analyzing the heterogeneity among stakeholder interests.