“As of January 29, 2017 Canada had received 40,081 Syrian refugees. The scale and scope of this resettlement is historic, with the only comparable event being the arrival of 60,000 Indo‐Chinese refugees in the late 1970s. Since that time, much has changed in local resettlement policy. This research focuses on one component of these changes—the role of Local Immigration Partnerships (LIPs) in Syrian refugee resettlement—through a case study of an official refugee reception centre in the Waterloo Region of Ontario and a series of interviews with key informants from multiple sectors involved in resettlement. Results indicate Waterloo's LIP playing a sizable role, but not acting as the sole response body to refugee resettlement. Nevertheless, participants saw the LIP as a crucial part of Waterloo's resettlement efforts.

Despite being a product of a tri‐level intergovernmental agreement, the LIP played a central role in shaping a local strategy by using local solutions. LIPs represent an example of place‐based policy that worked well during the Syrian Refugee Resettlement Initiative, but LIPs’ success may set a challenging precedent for future mass refugee resettlement events.”

Scholars have highlighted the need to understand the local nature of the refugee resettlement process (Lewis 2010). Findings of Waterloo Region’s LIP demonstrate the value of a locally‐based and driven approach to mass refugee resettlement. The WRIP played a critical role in Waterloo Region’s successful SRRI operation. In particular, the WRIP identified what the scope of the SRRI would mean in terms of  community commitments before political commitments, proactively began the planning process, mobilized organizations, distributed vital information across Waterloo Region, connected organizations, educated  personnel unfamiliar with the refugee resettlement process, and used its knowledge and expertise to help construct the Resettlement Steering Committee. As the surge phase of the SRRI intensified and the  Resettlement Steering Committee became the principal body for leading Waterloo Region’s SRRI, the WRIP adapted, becoming a sister structure.

The WRIP’s participation in Waterloo Region’s SRRI operation can be attributed to Waterloo Region’s history of place‐based policy in immigration and refugee issues. Dating back to the turn of the 21st century, Waterloo Region had been holding events and forums on these issues. The establishment of the WRIP in 2011 marked the culmination of years of conversations and initiatives. At the time of the emergence of the  Syrian refugee crisis, the WRIP had long been the primary vehicle for immigration and refugee issues for Waterloo Region. It had, therefore, a strong awareness of the community’s capabilities and had already  been working at the regional scale needed to respond to the influx of Syrian refugees. Being one of the first LIPs in Canada aided in this regard: the WRIP had the time to complete steps before the Syrian crisis emerged that other communities without an LIP might not have had the opportunity to take. Even without direction from IRCC, Waterloo Region’s history of proceeding without upper‐level government support—as it had to with the WRIP’s predecessor, WRIEN—helped pave the way for the WRIP to proceed on its own terms.

Bradford and Andrew (2010) suggest that LIPs provide a foundation for governance innovation. Based on how the WRIP responded to the SRRI, this proved accurate. However, Waterloo Region felt they needed a larger structure to address the SRRI. This decision highlights the limitations of the LIP model.

As our research was a rapid‐fire evaluation, the relevance of our data is limited to a specific time period of the SRRI. Because of this, there may be opportunities to examine the role of LIPs as it relates to the    longer‐term resettlement of Syrian refugees. As LIPs are planning bodies, this might be a natural fit. Geographically, we looked at LIPs in second‐tier cities in Ontario. However, with 76 LIPs now across Canada, an   area for future research would be to see how LIPs with shorter lifespans in other provinces fared in the SRRI, if they participated at all. LIPs across Canada are primarily federally funded.

That said, the provincial  government in Ontario has a history of minimal activism in advocating for more immigration authority. This may have played a part in the provincial government’s restrained role in the SRRI in terms of LIPs. Would provinces with a history of coveting and securing more power in immigration policy be so relaxed about not encouraging or attempting to activate LIPs for their SRRI operations? This would be worthy of further study. 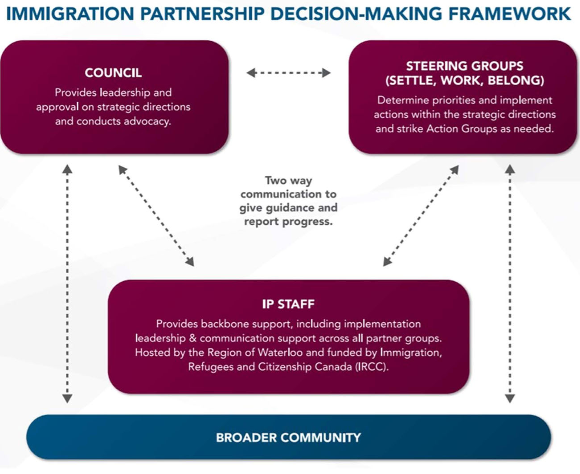 This research focuses on the role of Local Immigration Partnerships (LIPs) in Syrian refugee resettlement through a case study of an official refugee reception centre in the Waterloo Region of Ontario and a series of interviews with key informants from multiple sectors involved in resettlement.