Meghan Benton is a Senior Policy Analyst and Assistant Director for Research for the International Program at MPI. She is also a Nonresident Fellow with MPI Europe. Her areas of expertise include immigrant integration (especially labor-market integration and integration at the local level), free movement and Brexit, and the role of technological and social innovation in responses to the refugee and migration crisis in Europe.

Dr. Benton previously was a Senior Researcher at Nesta, the United Kingdom’s innovation body, where she led projects on digital government and the future of local public services. Prior to joining Nesta, she was a Policy Analyst at MPI from 2012-15, where she co-led an MPI-International Labor Organization six-country project on pathways to skilled work for newly arrived immigrants in Europe. She also worked on Project UPSTREAM, a four-country project on mainstreaming immigrant integration in the European Union. Previously, she worked for the Constitution Unit at University College London and the Institute for Public Policy Research. 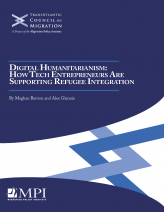 Digital Humanitarianism: How Tech Entrepreneurs Are Supporting Refugee Integration
This report finds that many new tech tools for migrants have failed to live up to their promise, in part because of extensive duplication in the sector, limited understanding of refugees’ needs, and funding and organizational limitations.
Read more 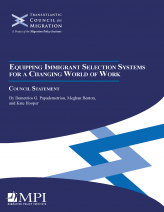 Equipping Immigrant Selection Systems for a Changing World of Work (Transatlantic Council Statement)
This report explores the implication of the changing world of work for immigrant selection systems, highlighting key challenges such as figuring out how to anticipate future labor-market needs, balance employer demand with human-capital considerations, and build an element of regional variation into selection processes.
Read more