“In Germany, a new program for refugee resettlement with the involvement of private actors is currently being tested. The controversially discussed pilot project points to a trend towards privatizing refugee reception policies – a model that was established in Canada more than 40 years ago and is a central pillar of its refugee policy. In this article, we compare programs of public-private cooperation in Germany and Canada and examine the relationship between the state and civil society with regard to these active refugee reception policies: In what ways is private sponsorship taking on tasks in the field of refugee policy that generally fall within the scope of state responsibility? And can the Canadian model be a prototype for German refugee policies?”

What would it mean to establish private sponsorship as an integral part of German refugee policy? In order to implement a private sponsorship model as in Canada, a number of preconditions are required. First, civil society needs to be prepared to support refugees and mobilize private resources. This commitment has already been shown in the case of the Länder programs. Additionally, legal frameworks are required, on the basis of which the refugee can safely enter the country by visa and obtain a residence permit. To mediate between the state and the citizens and to support the latter, stable structures and institutions are needed, for example regulations for application, selection and matching processes as well as long-term advisory centres such as the Civic Contact Point.

Institutionalizing the program, as in Canada, would give public recognition to civil society's commitment to refugee reception. In addition, providing permanent residency from the outset would be required to give refugees a secure perspective regarding their future, which is currently not the case in Germany. However, the Canadian implementation of private sponsorship also has problematic aspects. The increasingly restrictive regulations on the number and selection of refugees make the process complicated for potential sponsors and make access more difficult for those seeking protection. Long and varying processing times depending on the region of origin can lead to frustration for private actors and the feeling of loss of control in the private sponsorship process towards the government -despite high personal commitment. In light of the Canadian experience, it is therefore important to make private sponsorship legally possible, easy to implement and accessible.

“Overall, the introduction of private sponsorship programs in Germany appears to be an ambivalent project with its implementation remaining unclear. On the one hand, new possibilities of refugee admission are created, on the other hand, the total number of refugees admitted as a result has not yet been significantly increased and the outsourcing of protection to civil society can be accompanied by a precarisation of rights. In addition, the same aspect of limited impact regarding numbers applies to this model as to resettlement as a whole and other state-organized refugee reception policies. These currently only allow a small and selected group of refugees to seek shelter in countries of the Global North. It is therefore problematic if these policies are indirectly used to justify the criminalisation of undocumented flight movements. On the contrary, state reception of refugees should be accompanied in the long term by recognition of their self-determined mobility. Currently, it is not sponsors, or even nation states, but primarily the refugees themselves, who enable access to refugee protection, even if illegalized and often dangerous escape routes have to be taken due to the rigid border controls.” 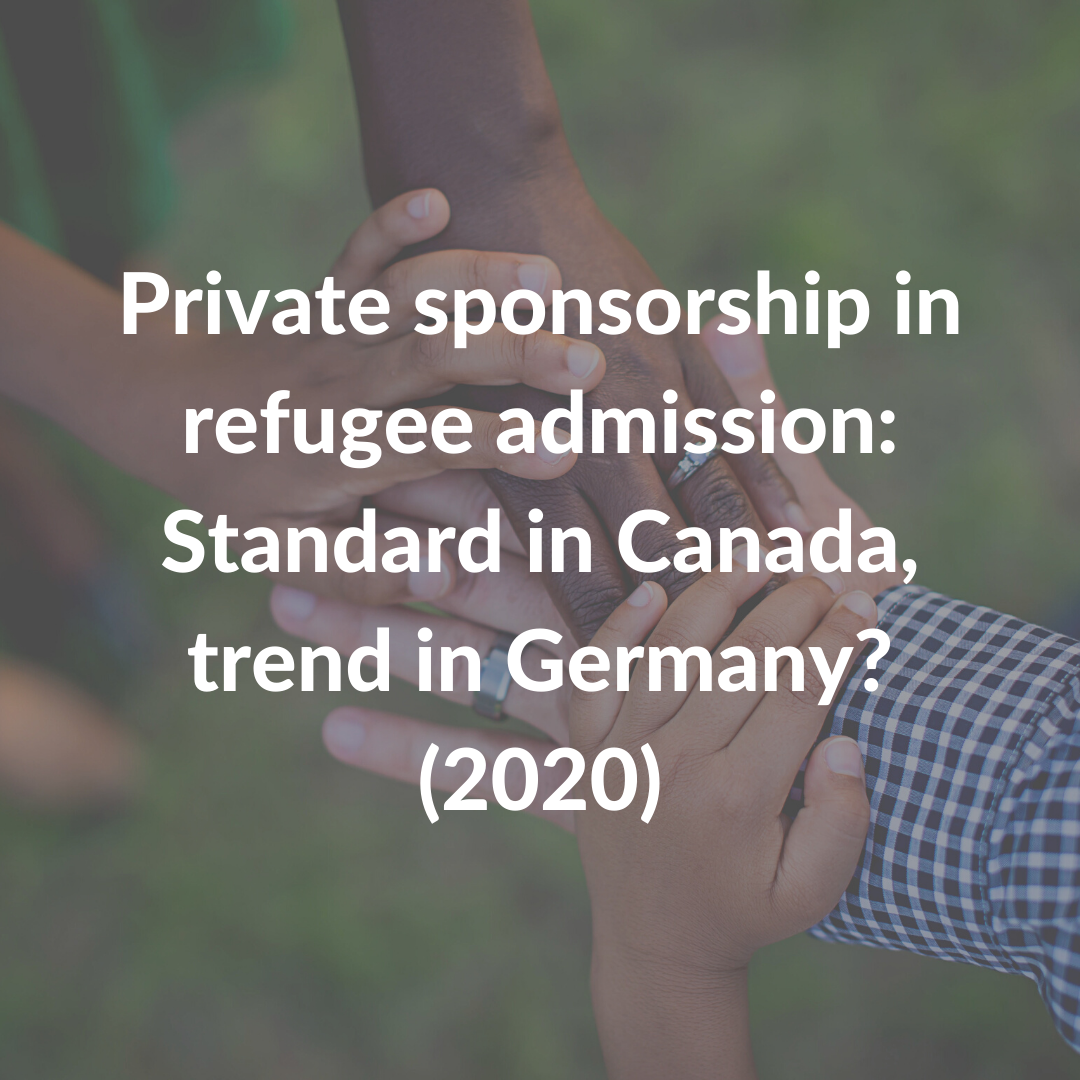 In this article, the authors compare programs of public-private cooperation in Germany and Canada and examine the relationship between the state and civil society with regard to these active refugee reception policies.