For refugees, Information and Communication Technologies (ICTs) and mobile technologies can help with relocation, provide the means to stay connected to family and friends, and learn about the new cultural environment.

In this paper, the authors examine the role of social media in facilitating and building transcultural communication and connections for forced migrants in today’s contexts of resettlement. The authors' focus is on recently resettled Syrian refugee youth in Ottawa, who arrived in Canada as part of a federal government resettlement initiative in 2015-2016.

Based on the findings of a qualitative study comprised of focus groups with Syrian refugee youth, both female and male between the ages of 16-25, they investigate the everyday use of social media in the process of resettlement and integration. Using thematic analysis, they draw on the concept of transculturality to discuss the role of social media as a space for transcultural coming-together that can assist in becoming familiarized with a new culture and society. The authors suggest that social media serve as a ‘contact zone’ that enables cultural sharing and learning, a mechanism for cultural and linguistic ‘translation’, and a ‘borderlands’ that may help bridge cultural differences and build connections while also negotiating a sense of belonging. Through a critical engagement with these findings they ponder the significance of social media for enabling refugee agency and as a transcultural ‘virtual’ space that enhances refugees’ resettlement and integration.

One central finding emerging from focus group discussions was the role of social media as a contact zone that helped Syrian refugee youth to learn about Canada, its culture, languages, and everyday life. Moreover, participants indicated that they used social media to share information about Canada with other Syrians (both in Canada and elsewhere), while also sharing information about Syria, thus effectively creating opportunities for transcultural meeting and exchange. Syrian refugee youth can exercise a degree of control when using social media to help them access the information they need in the resettlement process, especially in regard to language use and code switching on social media platforms. Moreover, we found that the use of social media can help these youth navigate a new society by providing digital tools of cultural and linguistic translation.

A small number of participants mentioned that they had turned to ICTs to find information about Canada before the resettlement process. The majority, however, explained that it was not until after arriving in Canada that they used both online tools (e.g., Google search) and various social media (Facebook, WhatsApp, Instagram, Snapchat) to learn more about the country, including its geography, people, culture and traditions.

Participants relied on both online tools and social media; the latter seemed especially useful to these youth because of their interactive features and the opportunities for active transcultural exchange in the process of learning and adapting to a new society.

Participants were acutely aware of the linguistic tools available to them within the ICTs they use. In this sense, participants were able to manifest a sense of empowerment in choosing which languages they used for each platform. Despite being limited to only English in some situations, this in turn developed a sense of linguistic control as they developed code switching skills between English and Arabic. Moreover, of interest here is that social media, in spite of being virtual, also encompass a very practical dimension through their everyday use. The very use of social media (the interaction with visual symbols, the typing of keywords, contents such as text and videos, etc.) provides an interface for learning and practicing a new language.

The use of social media to build social networks was another major theme raised by Syrian refugee youth during the focus group discussions. These social networks took three primary forms: connecting with family and friends in Syria and/or in other countries, connecting with other Syrians in Ottawa, and connecting with Canadians and developing new friendships in Ottawa. In all cases, participants stressed the importance of using social media such as WhatsApp, Snapchat, and Facebook in order to help bridge cultural differences and strengthen ties in a new country. In this
sense, social media represent not only a contact zone, but also a borderlands that allows Syrian refugee youth to maintain, develop and negotiate networks with people located in multiple places and in different cultures, while also mediating the creation of new connections in a new cultural context. In this process, it emerged that social media use contributes to a sense of belonging both ‘here’ and ‘there’. Moreover, findings provide insight into the agency of Syrian refugee youth through the use of social media to build connections, and the complex dynamics between virtual, physical, and social spaces in so doing.

Another aspect that social media use helped our participants to manage was to not forget their past lives. The use of social media enabled them to stay connected with people in the place of origin; to some extent this connection helps to maintain a sense of belonging over ‘there’, or to a place outside of Canada. These findings support existing research on the role of ICTs in assisting with maintaining sustained communication across borders, especially for separated families.

Social media proved especially useful for Syrian refugee youth to connect with Canadians and to negotiate a sense of belonging in Canada. In particular, participants discussed the fact that social media helped them to build new friendships by easing communication with Canadians.

These findings provide insights into how these young people use social media to develop new social networks. Social media provide a virtual contact zone where Syrian refugee youth can connect with Canadians with relative ease. Specifically, participants indicated that they are using social media as a tool to negotiate Syrian and Canadian cultures. In this sense, social media represent a  borderlands where these youth can forge new friendships across cultural differences. Furthermore, the findings illustrate complex dynamics between virtual and physical space; social media can facilitate the development of in-person contact and vice versa. In so doing, refugee youth may arguably feel they have some control in building new connections through the complementary use of  social media and face-to-face communication. Here again, social media can be seen as a resource that allows refugees to negotiate the process of resettlement on their own terms.

ICTs and social media as technologies that support transculturality. Specifically the data from this study suggest that they represent mechanisms of transculturalization by supporting virtual spaces for transcultural learning and sharing, by facilitating cultural and linguistic translation, and for building transcultural connections and bridging cultural differences. In this way, social media use in contexts of forced migration and resettlement can help refugees to negotiate and even construct a sense of belonging to two (or more) cultures and places simultaneously. To this end, the authors recognize social media as a virtual transcultural space, a contact zone of multiple cultures, and a borderlands where refugees as individuals can negotiate cultural differences.

As refugee youth, these young men and women were able to make successful use of their technological skills to alleviate and actively address some of the social and cultural challenges typically attributed to resettlement: access to information, language acquisition, transcultural communication, missing home, making friends, fitting in, and building a sense of belonging. To this extent, our  study adds empirical evidence to emerging research on immigrants’ strategic use of multiple media sources in the settlement and integration process, and on the integrative potential of various types of media.

Findings point to the potential benefits of using ICTs and social media to complement, develop and consolidate the provision of resettlement services. For example, settlement agencies can make   use of social groups on Facebook, WhatsApp, and Instagram to disseminate essential information to refugees regarding services and resources, while also following up after face-to-face services on an individual basis. With this in mind, policy makers should take into account refugees’ usage of ICTs and social media as means to communicate and transmit information when designing and implementing resettlement initiatives.

It is essential to highlight that the use of social media and ICTs allows refugees to exercise agency and have a sense of control over their resettlement experience. Research participants’ adept navigation of social media demonstrates their resilience and creativity in staying up-to-date with the growing technology trends and in making the most of them in rebuilding their lives. As young people in a new country, these Syrian youth turned to digital tools as a means to enact change and take control of their future.

A major theme resonating through findings was the level of personal empowerment that these technologies afford individuals in contexts of displacement, leading us to believe in the power of new possibilities. 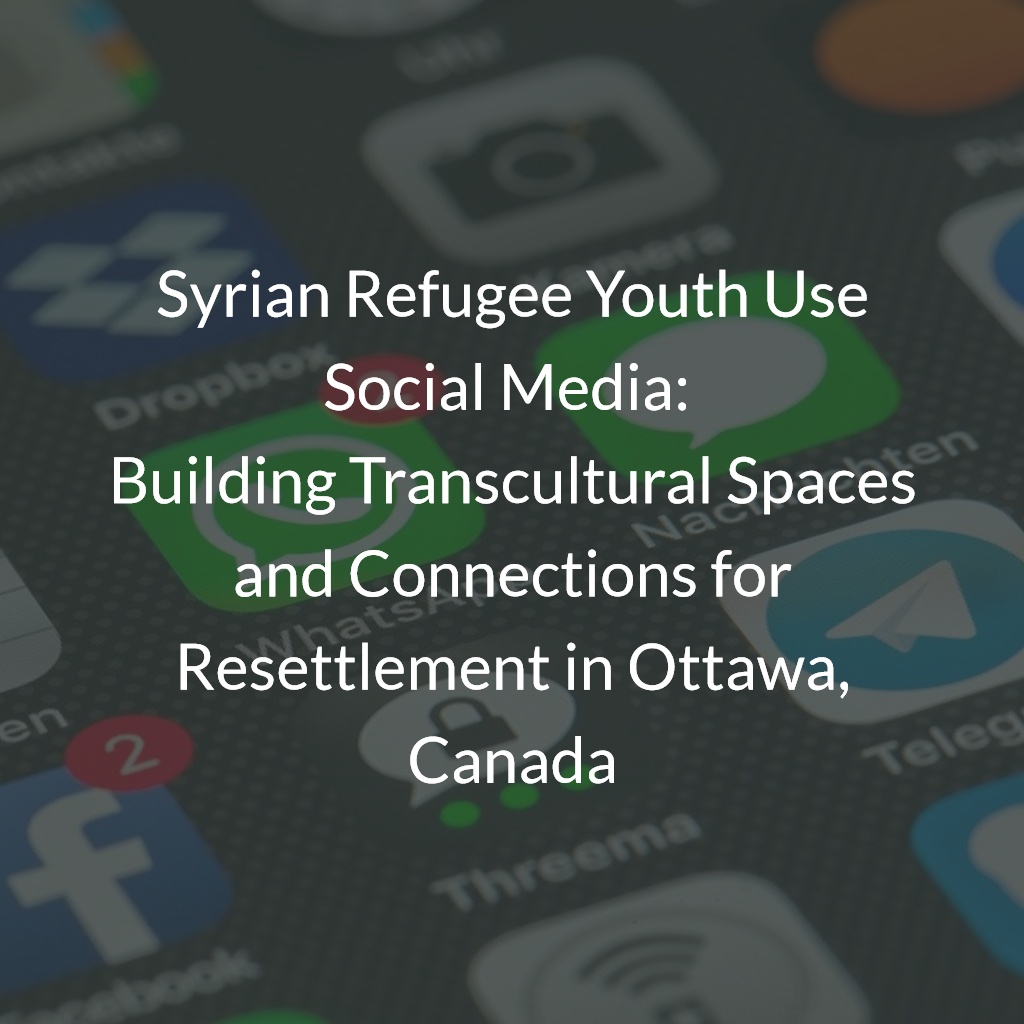 In this paper, the authors examine the role of social media in facilitating and building transcultural communication and connections for forced migrants in today’s contexts of resettlement. The authors' focus is on recently resettled Syrian refugee youth in Ottawa, who arrived in Canada as part of a federal government resettlement initiative in 2015-2016.