“Immigration to Canada is generally seen as a very positive phenomenon by the country and its people. Indeed, the country is faced with demographic dynamics such as a declining birth rate and an aging population that immigration is helping to counter. Canada has also seen the arrival of new people to its territory as a means of ensuring its economic, social and cultural development. The welcoming and integration of immigrants is therefore a real concern for institutions to ensure that newcomers feel comfortable in Canada and that the society as a whole benefits from their knowledge and skills. Canadian integration is often compared to a two-way street: on the one hand, Canada has resources to offer to immigrants so that they integrate and benefit from their new country, and on the other hand, Canada tries to adapt to these immigrants to learn from their experiences abroad and from their cultures, while simultaneously, ensuring they fully participate in the country's economic, social and civic life.

Many actors have different roles in these processes of welcoming and integrating immigrants to Canada. The federal government is obviously very involved in these areas, but provincial governments, municipalities and various non-governmental organizations are also engaged in the settlement of newcomers. Each province is more or less involved in welcoming and integrating immigrants on its territory, depending on its agreements with the federal government on this issue. Québec is the province that has gained the most control over settlement and integration, particularly as a result of the 1991 Gagnon-Tremblay-McDougall Agreement, which is still in effect in 2020. These acquired powers enable Québec to be much more independent in the selection of immigrants arriving on its territory and in facilitating settlement and integration.

This report attempts to describe the operation of this sector in the province of Québec in five main sections. The first contextualizes how immigration is influenced by the federal government in order to understand the overall national immigration and settlement system. Second, we look at Québec's positioning in this Canadian context. Third, we examine how Québec's immigrant integration system is structured, and then we dedicate a fourth stage to exploring the interests of the community sector in immigrant integration and the ongoing dialogue between the Québec government and non-profit immigrant-serving organizations. Finally, we outline current key trends that are likely to influence the future dynamics of integration in Québec, within the context of reforms and other new measures being implemented by the provincial government.”

“Québec, rather than the government of Canada, is the dominant policy actor in the field of immigration, settlement and integration. This situation stems mainly from the 1991 Canada-Québec Accord, which reduced the role of the federal government with respect to immigration in Québec and transferred these powers to the Québec government. From a jurisdictional perspective, there is no doubt that Québec has more powers over immigration and settlement than the other provinces. Conversely, if we consider the how immigrant settlement I s organized, many services are provided by community organizations, as they are provided by immigrant-serving agencies in other Canadian provinces. Québec has entered into agreements with community organizations to offer many settlement and integration services with funding from the Québec government. Only francization services continue to be offered directly by the province, often through local school boards and other public agencies.

Although Québec's reliance on community organizations to provide many settlement and integration services is in many ways similar to that in other provinces, it remains a province apart from the rest from a legislative point of view and in terms of the relations between the provincial government and the community sector.

Recent dynamics will change the organization and objectives of the community organizations offering settlement and integration services in the province of Québec, and it will be interesting to compare Québec with other Canadian provinces and, as part of the BMRC-IRBU research partnership, to see whether the sector is more resilient in the province of Québec than in Ontario and other Canadian provinces.” 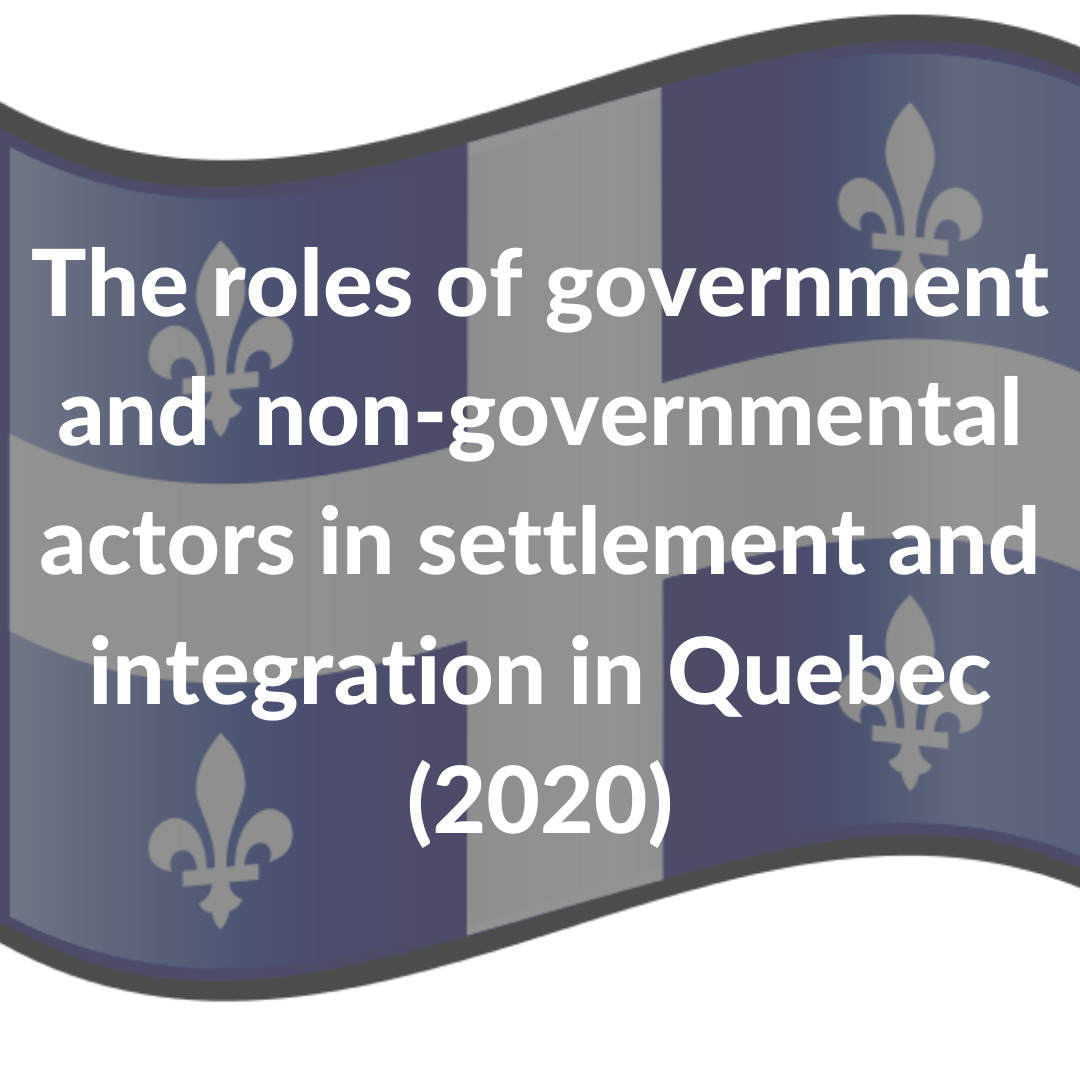 Many actors have different rolesin these processes of welcoming and integrating immigrants to Canada. This report attempts to describe the operation of this sector in the province of Québec.