Welcome Home: Welcoming refugee claimants and precarious migrants to the City of Toronto

“Refugee claimants and precarious migrants have to contend with a range of challenges when trying to find a place to stay in Toronto, whether that is finding temporary shelter in the first 24 to 48 hours after arrival, navigating the City’s shelter system, or securing longer-term housing.

These include challenges that many individuals face in a city with a stretched shelter system, a shortage in affordable housing, and a rental market that is increasingly inaccessible to large swathes of the population.

At the same time, these challenges are accentuated by the barriers specific to refugee claimants and precarious migrants, such as from discrimination due to race and/or immigration status, and the difficulty in settling in a new land and securing a decent job, resulting in poverty.

Despite some documentation of these problems, the vulnerabilities of refugee claimants and precarious migrants are rarely given due attention. Housing strategies rarely include refugee claimants and precarious migrants, and they are often absent from government plans addressing poverty and access to housing. There is also a lack of intersectional analysis when it comes to addressing the barriers to housing for these vulnerable groups.

The report, published by FCJ Refugee Centre with support from Maytree, examines challenges faced by refugee claimants and precarious migrants in accessing shelter in Toronto in three distinct phases of the settlement process:

For each phase, the report then offers recommendations that the City of Toronto can implement to ensure access to adequate housing, while including suggestions for other levels of government and the community sector where appropriate.

Housing is a human right, a hugely important factor in the settlement process, and a key prerequisite for the enjoyment of other rights such as health, education, work, privacy, and voting. While the right to adequate housing does not require governments to guarantee housing for everyone, it does require that they play an active role in facilitating and enabling the actions of all participants in the creation and improvement of adequate housing.”

2019-07-30 : Examining the feasibility and options for an inclusionary zoning policy in Toronto

2019-07-26 : Implementing a human rights-based approach to housing in the City of Toronto

2019-06-27 : Prioritizing fundamental human rights can help us find the clarity we need for good public policy

2019-05-31 : Youth in and from care and the right to education: Current context and recommendations

2019-03-28 : What the Canada Training Benefit could mean for the future of workers in Canada 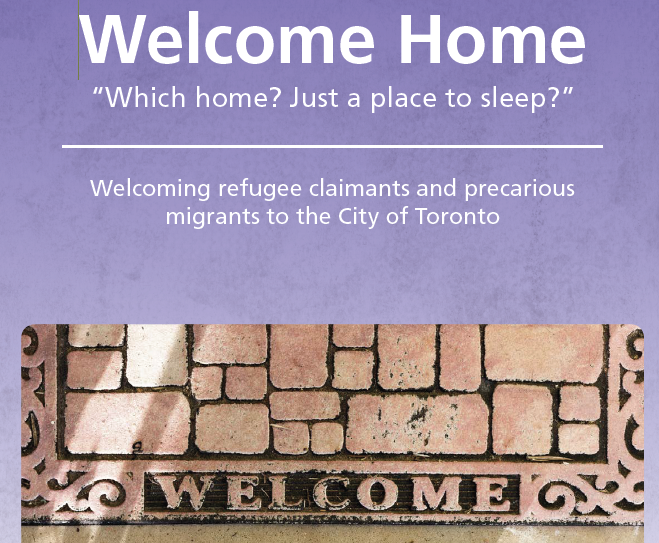 The report, published by FCJ Refugee Centre with support from Maytree, examines challenges faced by refugee claimants and precarious migrants in accessing shelter in Toronto in three distinct early phases of the settlement process.